Want to restore jobs and stimulate the economy? A new study (pdf) released by the California Nurses Association says that establishing a national single-payer healthcare system would do both — in addition to providing health insurance for 47 million uninsured individuals. 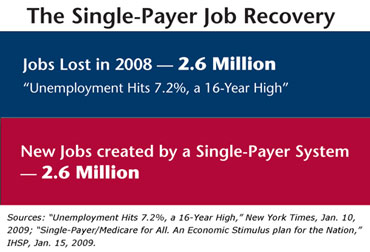 According to the study, expanding Medicare to include the uninsured, and those on Medicaid or employer-sponsored health plans, and expanding coverage for those with limited Medicare, would have the following immediate impacts:

The analysis looked at the U.S. health care industry as its currently structured and financed and its relationship to the U.S. economy. It took into account employment concerns, revenues, costs, taxes and specific kinds of transactions.

“Through direct and supplemental expenditures, healthcare is already a uniquely dominant force in the U.S. economy,” said Don DeMoro, lead author of the study and director of the Institute for Health and Socio-Economic Policy, the research arm of the National Nurses Organizing Committee/CNA.

“However, so much more is possible. If we were to expand our present Medicare system to cover all Americans, the economic stimulus alone would create an immense engine that would help drive our national economy for decades to come,” DeMoro said.

The study’s release coincides with the second National Call-In Day to Support Single-Payer Healthcare (H.R. 676). The call-in is organized by the Leadership Conference for Guaranteed Health Care (LCGHC), a coalition of national organizations, including Healthcare-NOW!, Physicians for a National Health Program, Progressive Democrats of America, and the CNA.

Plus: The House of Representatives yesterday approved expansion of the State Children’s Health Insurance Program (SCHIP). The bill, H.R. 2, would provide health insurance to an additional 4.1 million children and parents, including legal immigrant children and pregnant women. Under the current system, there is a five-year wait before becoming eligible for the program. A total of 11 million individuals could now receive coverage, reports the Washington Post.