Have a few moments to take a survey about emergency contraception?

Heather Munro Prescott, a history professor at Central Connecticut State University, is writing a book on the history of emergency contraception, and she’s looking for input from women who have used EC — as well as input from their partners, health care providers and activists. Prescott is especially interested in hearing from women who used EC in the 1960s, 1970s and 1980s. 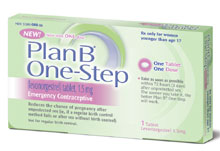 Yes, emergency contraception has been around for decades, though most of what we know about EC is connected to the FDA’s recent approval of over-the-counter access to Plan B, a progestin-only pill available to women as young as 17 without a prescription. It reduces a woman’s risk of pregnancy by up to 89 percent when taken within 72 hours of unprotected sex (research indicates Plan B can be taken up to 120 hours after, but the pill is more effective the sooner it’s taken).

Other types of EC are described at the Emergency Contraception website, an independent, peer-reviewed resource operated by the Office of Population Research at Princeton University and the Association of Reproductive Health Professionals. The website also links to Prescott’s survey.

Prescott, who  blogs at Knitting Clio — where you’ll find posts on medical history, disability studies and numerous other topics — outlined her project in an email to Our Bodies Ourselves:

This book will describe the history of emergency contraception from the 1960s until the present and place this story within the larger context of women’s health activism in the second half of the twentieth century. A major focus of the book will be the role women patients played in the dissemination of this technology. This project will show women not only as test subjects for this new method of birth control but also as active health care consumers.

In order to capture women’s experiences with emergency contraception, this project will use data from a survey administered through Survey Monkey: http://www.surveymonkey.com/s.aspx?sm=JNOZJvreEmADWmzx7I1wGg_3d_3d

Sounds like a great project, so if you have experience with EC, take the survey, or share the link.