For 25 years, Teen Voices magazine has provided a place for journalism and other writing created by and for teenage girls. This great publication, originally based in Boston, was on the brink of shutting down last year, but Women’s eNews took it under its wing, with plans to build upon its mission of improving the world for female teens through media.

The first stories published by the new Teen Voices are now online and tackle diverse issues including recovering from anorexia; why some women wear hijab and others don’t; feeling unworthy; and letters to celebrities as role models.

A design contest for the new Teen Voices logo is currently open to 12-19 year olds; the deadline is April 3. You can also follow Teen Voices on Facebook, Twitter and tumblr.

And if you’d like to support Teen Voices, there’s an IndieGoGo campaign running now through the end of March to raise funds for a “virtual newsroom,” including mentorship and paid writing assignments for teen girls.

We’re excited to see Teen Voices not only keep going, but expand the opportunities for its writers. Women’s eNews explains the need for this program and the goals: 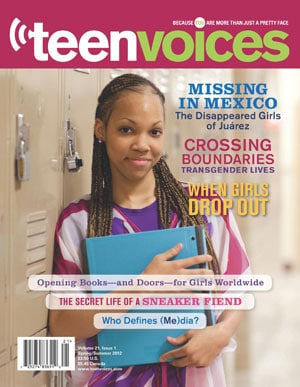 Teen Voices at Women’s eNews will provide opportunities for education and interaction so that young women can develop and amplify their voices and contribute to issues that personally affect them.

Young women in the U.S. and around the globe often have limited knowledge of the policies, practices and rituals that influence their lives directly, giving them little opportunity to voice their approval or objection. Consider this:

Teen Voices at Women’s eNews will provide honest and objective information about issues directly affecting female teens around the world, and serve as a powerful outlet for young women to express their views on issues of particular concern to them.

The project is being led by Lori Sokol, Ph.D., the new publisher of Teen Voices at Women’s eNews, theWomen’s eNews editorial, marketing and development staff and a diverse board of teenagers who will consult and advise on the issues being covered.

Don’t forget to check out the IndieGoGo campaign today!

Also! Our Bodies Ourselves has multiple back issues of the print edition of Teen Voices that we would like to give away. They are available for the cost of postage, $13 per box. If you are interested, send a check made out to “OBOS” to: Our Bodies Ourselves, 5 Upland Road #3, Cambridge, MA 02140. Be sure to include the address where the magazines should be sent. For more information, email: office AT bwhbc.org.