(11.29.12) Ed. note: Tell Stephen Colbert and The Colbert Report to send “Our Bodies, Ourselves” to Congress this holiday season! All that Super PAC money has to go somewhere — might as well Educate Congress!

Stephen Colbert has it in for “Our Bodies, Ourselves.”

During an interview with Diane Sawyer on “Good Morning America” this week to promote his upcoming TV special, “A Colbert Christmas: The Greatest Gift of All!” (Sunday, Nov. 23, 10 p.m. EST), the talk-show host announced he was burning our flagship book, often considered the bible of the women’s health movement. 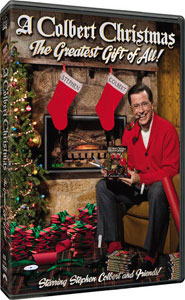 “Is it true what I’ve heard, that you have a yule log with some books you’re burning?” Sawyer asked.

“Well, I had some books laying around,” replied Colbert, “and on the DVD we have an 18-minute video yule log of burning ‘Our Bodies Ourselves’ — you know, kindling.”

Despite the image of pages going up in flames in the cozy hearth, my heart still swoons.

Maybe it’s because Colbert’s medical analysis is so spot-on. Take his recent “Cheating Death with Dr. Stephen T. Colbert, DFA.” Naturally we appreciate the skeleton clutching “Our Bodies, Ourselves,” but we also admire Colbert’s incisive analysis of pharmaceutical industry’s push to prescribe drugs to people who don’t need them.

The “Cheating Death” segment was inspired by the well-publicized JUPITER trial, which suggested that the cholesterol-lowering drug Crestor could prevent heart attacks in people with normal cholesterol levels who exhibit high levels of C-reactive protein.

(Scientific American has a concise summary of the New England Journal of Medicine article, and the accompanying editorial by Mark Hlatky, a Stanford University health-policy professor who criticizes the scope of the study and questions the cost of expanding the use of statins. Dr. Nortin Hadler, professor of medicine and microbiology/immunology at UNC-Chapel Hill and author of “Worried Sick: A Prescription for Health in an Overtreated America,” is also skeptical of the benefits of statins.)

Colbert identifies the study’s most notable success: “This is a great breakthrough in the battle to find things to prescribe to people who don’t need them.”

That and other comments led Ivan Oransky to make a few suggestions concerning Colbert’s future that we here at OBOS enthusiastically support:

This is the kind of intellectual rigor that is — and I’ve removed my tongue from my cheek only somewhat — too frequently missing from news reporting on medical studies.

So I’d like to suggest that Colbert launch The Colbert Journal of Medicine. We might have some disagreements about the kind of scientists who would be his peers, to make the journal peer-reviewed. (We hear he has a bit of an ego.)

Dr. Colbert would have to disclose his own conflicts of interest. We’d need to know more, for example, about his relationship with Prescott Pharmaceuticals, which sponsors “Cheating Death.” After all, Prescott makes VaxaCrest, which increases cholesterol until “your heart is pumping liquid nacho cheese,” as Colbert informed us last night. But at least he’s comfortable disclosing potential side effects of his sponsor’s fare — in this case “fallopian tapeworm.”

He did have some trouble pronouncing “hormones” at one point. It came out “homones” (Ho-mones). So he may need some help presenting at meetings.

Or maybe we should just put his name forward for U.S. Food and Drug Administration commissioner.

If Colbert somehow gets the appointment, perhaps he’ll put his vendetta against my employer aside long enough to allow Judy Norsigian, OBOS co-founder and executive director, to take over the Office of Women’s Health.

Heck, we’d settle for the opportunity to go head-to-head with Colbert on “The Colbert Report.” There are plenty of topics concerning women’s health and politics Norsigian could discuss. And maybe she’d stop him from throwing more feminist titles on the yule log this season …

Plus: Check out these related articles: Who Paid For That Study? Identifying Conflicts of Interest in Medical Research and “Women and Heart Disease: Selling Statins.”