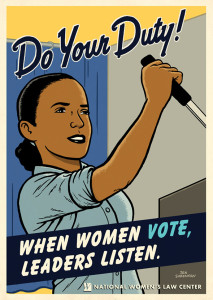 A lot hangs on this presidential election.

On the state level, personhood amendments that grant fertilized embryos all the rights of a born human didn’t make it onto any ballot, but two states, Florida and Montana, have put restrictive abortion initiatives before voters.

The National Women’s Law Center has published a voter education section with a number of useful links, including fact sheets on issues affecting women and great images to share — like the one on the left by Jen Sorensen.

For more on the election and the importance of women voters, visit Women’s Vote Watch 2012, a project of the Center for American Women and Politics that tracks and analyzes polling data. Here’s a section on the gender gap and voting.

Finally, if long lines get you down, just think of Galicia Malone of Dolton, Ill., who stopped to vote this morning on her way to give birth.

The clerk’s office said Malone’s water had already broken when she made the stop to vote in her first presidential election.

“If only all voters showed such determination to vote,” [Cook County Clerk David] Orr said. “My hat goes off to Galicia for not letting anything get in the way of voting. What a terrific example she is showing for the next generation, especially her new son or daughter.”

And remember, no matter who wins, we still have to work on educating Congress about women’s health …