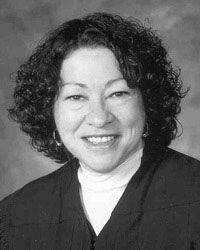 Viewers and listeners can expect statements today from each of the Senate Judiciary Committee members and possibly Sotomayor’s opening statement.

For a look at some of the issues sure to arise, head over to SCOTUSblog, where Kristina Moore provides a detailed look at Sotomayor’s judicial record, neatly organized by subject matter.

The AP reports on the mock hearings Sotomayor has gone through and, in a separate story, on the restrained support offered by some women’s groups.

Sotomayor is expected to be confirmed, but as Michael D. Shear points out, there are other issues and agendas to look for this week:

Democrats are betting that an overly zealous assault on Sotomayor by Republican senators could anger Latinos and accelerate the shift of Hispanic voters away from the Republican Party, particularly in the South and West.

Conservatives are hoping to use the Sotomayor hearings as a way to motivate their base if they can successfully portray her as an activist judge whose “empathy” for certain groups guides her rulings more than court precedent or the written law.

And activist groups on both sides have already prepared press releases and statements to argue that the Sotomayor outcome says something about where the country’s population is on the issues of guns, abortion, affirmative action, race and gender. Liberals hope an overwhelming vote for her confirmation will encourage Obama to consider even more progressive nominees in the future.

Dahlia Lithwick has kindly put together everything you need to know about the hearing, including who will say what (yes, she can predict these things):

For those brave souls choosing to watch this spectacle on live television all week, it’s useful to point out that most of her interlocutors will not be addressing themselves to Judge Sotomayor at all, although they will frequently use her name. Instead, they will be talking aloud to their constituents back home, with Judge Sotomayor serving as a sort of constitutional blackboard on which to sketch out their legal views: Senators will talk at length about their pet projects and concerns, then turn to ask Judge Sotomayor what she thinks of their pet projects and concerns. She will say she is for them. […]

Other senators, such as Arlen Specter, will attempt to tap into Judge Sotomayor’s judicial subconscious; asking trick questions about whether she thinks precedent is important (she’ll say it is) and what she thinks of specific cases (she will take a page from Chief Justice John Roberts’ book and summarize cases, without opining on them). She will make blurry-yet-bold pronouncements about the right to privacy, personal autonomy, and bodily integrity—none of which will clarify her stand on abortion.

Both sides will ask how it’s possible that she has ruled in a handful of abortion cases over the years without ever addressing the rightness of abortion itself. She will reply that she is a careful minimalist who answers only the question before her. Both sides will grind their teeth in frustration at this marked absence of judicial activism, which makes it very hard to tell whether she will be a judicial activist once confirmed. Jeff Sessions will rail that Sotomayor should have been more of a judicial activist (he will say “zealous constitutional watchdog”) where gun rights were concerned. Everyone will thus agree that judicial activism is bad except insofar as it’s good.

There’s more. Actually, if you’ve got nothing else going on this week, Lithwick’s predictions may be the basis of a supreme drinking game.

Remembering what it took to get to this moment, the Women’s Media Center has documented racist and sexist comments made about Sotomayor in various media outlets. A video, “Media Justice for Sotomayor,” ties it all together: