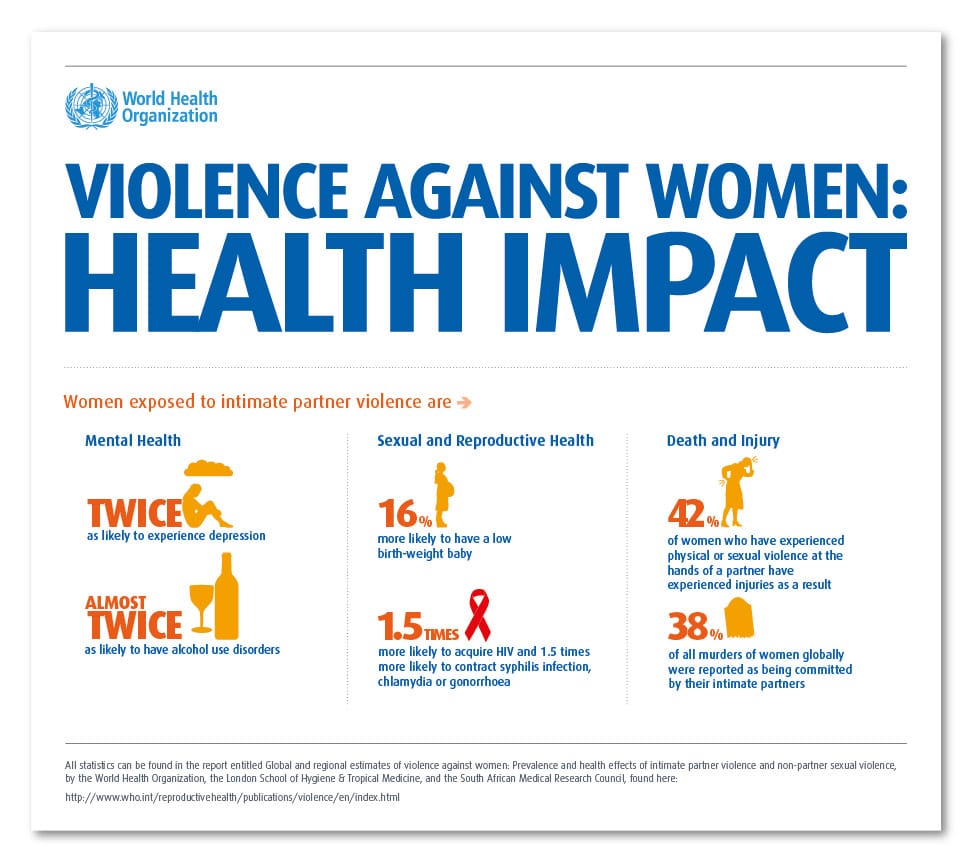 The World Health Organization has released a new report, “Global and regional estimates of violence against women: prevalence and health effects of intimate partner violence and non-partner sexual violence,” [PDF] that attempts to quantify how many women around the world are exposed to physical and sexual violence at some point in their lives, and describes many of the associated poor health outcomes.

The findings are probably not surprising, but they are still disturbing.

WHO reports that 35 percent of women worldwide — more than 1 in 3 — have been physically and/or sexually abused. These figures do not include emotional/psychological abuse.

Most of the violence is committed by intimate partners. WHO estimates that almost one third (30 percent) of all women who have been in a relationship have experienced physical and/or sexual violence by their intimate partner, while 7 percent of women have been sexually abused by a non-partner.

Among the key findings on health outcomes:

• Globally, as many as 38 percent of all murders of women are reported as being committed by intimate partners.

• Forty-two percent of women who have been physically and/or sexually abused by a partner have experienced injuries as a result of that violence.

– have 16 percent greater odds of having a low-birthweight baby;

– are more than twice as likely to have an induced abortion;

– are more than twice as likely to experience depression.

The report ends with an important call to action:

This report unequivocally demonstrates that violence against women is pervasive globally and that it is a major contributing factor to women’s ill health. In combination, these findings send a powerful message that violence against women is not a small problem that only occurs in some pockets of society, but rather is a global public health problem of epidemic proportions, requiring urgent action. As recently endorsed by the Commission on the Status of Women, it is time for the world to take action: a life free of violence is a basic human right, one that every woman, man and child deserves.