This article looks at the structure (known as the anatomy) and function (the physiology) of female genitals.

The appearance, shape, and size of genitals vary from person to person as much as the shape and size of other body parts. There is a wide range of what is considered normal. Observing your own body can help you to learn what is normal for you.

The following descriptions will be much clearer if you look at your genitals with a hand mirror while you read the text. Make sure you have enough time and privacy to feel relaxed. Try squatting on the floor and putting the mirror between your feet.

If you’re uncomfortable in that position, sit as far forward on the edge of a chair as you comfortably can, separate your legs, and place the mirror between them. If you’re having a hard time seeing, try aiming a flashlight at your genitals or at the mirror. 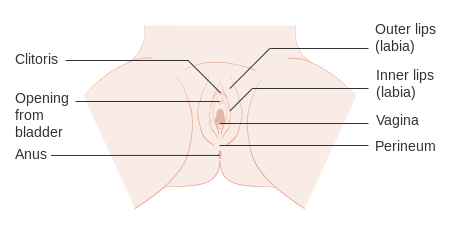 First, you will see your vulva — all the external organs you can see outside your body. The vulva includes the mons pubis (Latin for “pubic mound”), labia majora (outer lips), labia minora (inner lips), clitoris, and the external openings of the urethra and vagina.

People often confuse the vulva with the vagina. The vagina, also known as the birth canal, is inside your body. Only the opening of the vagina (introitus) can be seen from the outside.

Unless you shave or wax around your vulva, the most obvious feature is the pubic hair, the first wisps of which are one of the early signs of puberty. After menopause, the hair thins out.

Pubic hair covers the soft fatty tissue called the mons (also mons veneris, mound of Venus, or mons pubis). The mons lies over the pubic symphysis. This is the joint of the pubic bones, which are part of the pelvis, or hip girdle. You can feel the pubic bones beneath the mons pubis.

As you spread your legs, you can see in the mirror that the hair continues between your legs and probably around your anus. The anus is the outside opening of the rectum (the end of the large intestine, or colon).

Read: The Ideal Labia is Your Own: Online Sites Push Back Against “Model” Genitalia

The fatty tissue of the mons pubis also continues between your legs to form two labia majora, the outer lips of the vulva. The hair-covered labia majora are also fatty, and their size, color and shape differ considerably among women.

Starting from the front, right below the mons, the inner lips join to form a soft fold of skin, or hood, over and covering the glans, or tip of the clitoris.

Gently pull up the hood to view the glans. The glans is the spot most sensitive to sexual stimulation. Many people confuse the glans with the entire clitoris, but it is simply the most visible part.

Did you know the clitoris is similar in origin and function to the penis? All female and male organs are developed from the same embryonic tissue. In fact, female and male fetuses are identical during the first six weeks of development. The glans of the clitoris corresponds to the glans of the penis, and the labia majora correspond to the scrotum.

Let the hood slide back. Extending from the hood up to the pubic symphysis, you can now feel a hardish, rubbery, movable rod right under the skin. It is sometimes sexually stimulating when touched. This is the body or shaft of the clitoris. It is connected to the bone by a suspensory ligament. You cannot feel this ligament or the next few organs described, but they are all important in sexual arousal and orgasm.

At the point where you no longer feel the shaft of the clitoris, it divides into two parts, spreading out wishbone fashion but at a much wider angle, to form the crura (singular: crus), the two anchoring wing tips of erectile tissue that attach to the pelvic bones. The crura of the clitoris are about three inches long.

Starting from where the shaft and crura meet, and continuing down along the sides of the vestibule, are two bundles of erectile tissue called the bulbs of the vestibule. The bulbs, along with the whole clitoris (glans, shaft, crura), become firm and filled with blood during sexual arousal, as do the walls of the vagina.

Both the crura of the clitoris and the bulbs of the vestibule are covered in muscle tissue. This muscle helps to create tension and fullness during arousal and contracts during orgasm, playing an important role in the involuntary spasms felt at that time. The clitoris and vestibular bulbs are the only organs in the body solely for sexual sensation and arousal.

The Bartholin’s glands are two small rounded bodies on either side of the vaginal opening near the bottom of the vestibule. They secrete a small amount of fluid during arousal. Usually you cannot see or feel them.

If you keep the inner lips spread and pull the hood of the clitoris back again, you will notice that the inner lips attach to the underside of the clitoris. Right below this attachment you will see a small dot or slit. This is the urinary opening, the outer opening of the urethra, a short (about an inch and a half), thin tube leading to your bladder.

Walls of the Vagina

If you’re comfortable doing so, slowly put a finger or two inside your vagina. If it hurts or you have trouble, take a deep breath and relax. You may be pushing at an awkward angle, your vagina may be dry, or you may be unconsciously tensing the muscles owing to fear of discomfort. Try shifting positions and using a lubricant such as olive or almond oil (don’t use a perfumed oil or lotion that could cause irritation).

Notice how the vaginal walls, which were touching each other, spread around and hug your fingers. Feel the soft folds of mucous membrane. These folds allow the vagina to stretch and to mold itself around whatever is inside, including fingers, a tampon, a penis, or a baby during childbirth.

The walls of the vagina may vary from almost dry to very wet. The vagina is likely to be drier before puberty, during breastfeeding, and after menopause, as well as during that part of the menstrual cycle right before and after the flow. It’s likely to be wetter around ovulation, during pregnancy, and during sexual arousal.

Push gently against the walls of the vagina, and notice where the walls feel particularly sensitive to touch. This sensitivity may occur only in the area closest to the vaginal opening, or in most or all of the vagina.

Normal/Not Normal
Vaginal and cervical fluid (discharge) are normal. However, any of the following may indicate an infection or another problem. Contact a healthcare provider if you experience:

About a third of the way up from the vaginal opening, on the anterior (front) wall of the vagina (the side toward your abdomen), is an area known as the Gräfenberg spot, or G-spot. Many women experience intensely pleasurable sensations when this area is stimulated. There are differences of opinion over whether the G-spot is a distinct anatomical structure or whether the pleasure felt when the area is stimulated is due to its closeness to the bulbs of the clitoris.

When your finger is halfway in, try to grip it with your vagina. That sensation you feel is a contraction of the of the pelvic floor muscles. These muscles hold the pelvic organs in place and provide support for your other organs all the way up to your diaphragm, which is stretched across the bottom of your rib cage. Kegel exercises may help to strengthen the pelvic floor muscles.

Only a thin wall of mucous membrane and connective tissue separates the vagina from the rectum, so you may be able to feel bumps on the back side of your vagina if you have some stool in the rectum.

Slide your middle finger as far back into your vagina as you can. Notice that your finger goes in toward the small of your back at an angle, not straight up the middle of your body. If you were standing, your vagina would be at about a 45-degree angle to the floor. With your finger you may be able to just feel the deep end of your vagina, or the fornix. (Not everyone can reach this; it may help if you bring your knees and chest closer together so your finger can slide in farther.)

Want to learn more? Continue on and take the cervix self-exam >

A little before the end of the vagina you can feel your cervix. The cervix feels like a nose with a small dimple in its center. The cervix (from the Latin cervix uteri, meaning “neck of the womb”) is the part of the uterus or womb that extends into the vagina. It is sensitive to pressure but has no nerve endings on the surface.

The uterus changes position, color and shape during the menstrual cycle, as well as during puberty and menopause, so you may feel the cervix in a different place from one day to the next. Some days you can barely reach it. The vagina also lengthens slightly during sexual arousal, carrying the cervix deeper into the body.

The dimple in the cervix is the os, or opening into the uterus. The entrance is very small. Normally, only menstrual fluid leaving the uterus, or seminal fluid entering the uterus, passes through the cervix. No tampon, finger, or penis can go up through it, although it is capable of expanding enormously for a baby during labor and birth.

Period Poverty is a Human Rights Issue. Period. by Guest Contributor August 6, 2021 by Hannah Sachs-Wetstone What is period poverty? Let’s talk about period poverty. Period poverty occurs when menstruators cannot access the menstrual products, underwear, and pain medication they need to maintain their menstrual health due to a variety of factors, such…
Stopping Keystone: A Victory for Native Women’s Health by Guest Contributor July 1, 2021 By Hannah Sachs-Wetstone In early June, after more than ten years of conflict, the Keystone XL oil pipeline project was halted by TC Energy, the company behind the project. This is a victory for Indigenous communities and environmental activists. However,…
Persistent and Pervasive: Feminists Take on Toxics by Judy Norsigian December 7, 2020 For a variety of reasons, including gendered work and home experiences, women face different environmental health risks than men. Women are more likely to use personal care products, cosmetics, and cleaning products, and therefore more likely to face daily exposure…
© 2022 Our Bodies Ourselves. All Rights Reserved.
Crafted by Cornershop