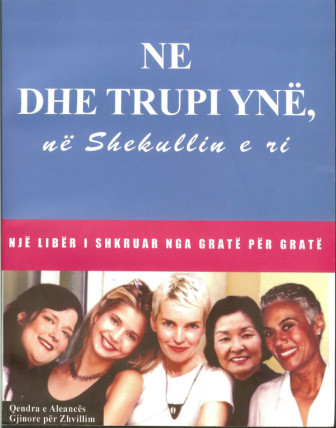 Translation: We and Our Bodies in the New Century

Gender Alliance for Development Center (GADC) published an adaptation of Our Bodies, Ourselves in 2006. Supported by the Soros Foundation, GADC distributed more than 1,000 copies in Albania and Kosovo, which has a large Albanian population.

The book also addresses the specific needs of older women and provides information on assisted reproductive technologies and other emerging medical procedures.

“[Our] library currently holds more than 2,000 volumes on gender issues in psychology, sociology, political sciences and social work. It is the only one of its kind in Albania.”
– GADC

“Ne Dhe Trupiynë, në Shekullin e ri” was designed as a tool for action, with chapters on politics and global movements related to women’s health and human rights.

The OBOS Global Initiative helped increase access to this resource by distributing copies to organizations serving Albanian immigrants in the United States and by posting excerpts on select topics online. These excerpts are still available to read (see below).

The following Albanian chapters are available in PDF format.

Gender Alliance for Development Center was established in 1995 as part of a project called “Refleksione” (Reflections) funded by the Open Society Institute for Albania.

One of GADC’s primary goals is to advance gender equality by developing and distributing evidence-based information. The Albanian adaptation of Our Bodies, Ourselves is one of many resources published by the organization to engage grassroots communities and institutional stakeholders.

Since 1995, GADC has implemented more than 50 projects related to women’s health and human rights, ranging from securing women’s livelihoods and increasing participation in politics and public policy, to initiatives that focus on peace building and gender-based violence.

To advance a broader agenda, the GADC serves as a key reviewer for the Albanian government on laws and policies related to gender, and it regularly conducts outreach with policy makers. In addition, GADC collaborates extensively with international agencies such as UNIFEM, UNICEF, UNDP, the European Commission, the U.S. Embassy to Albania, and OSCE, as well as the Universities of Tirana and Shkodër. The organization boasts a large professional and student network of volunteers.