Taking Charge of Our Bodies: A Health Handbook for Women (2004)

Anveshi published “A Hundred Thousand Questions about Women’s Health,” a book in Telugu inspired by “Our Bodies, Ourselves,” in 1991. The book is out of print.

Along with Penguin, Anveshi also published “Taking Charge of Our Bodies: A Health Handbook for Women,” in English, in 2004. 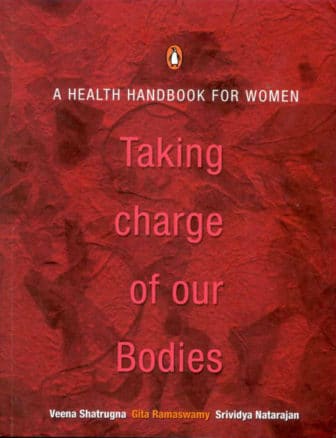 As the original Telugu edition had a regional flavor, the English version was revised as a pan-Indian edition for English speaking women across the sub-continent.

Writing in The Telegraph, a leading Indian newspaper, Nilanjana S. Roy described “Taking Charge of Our Bodies” as: “a project that leans on the thousands of stories women have to tell, that depends on knowledge shared by women. It knits together like a patchwork quilt, with everybody contributing to the grand design and the authors content to use the anonymous but empowering ‘we.’”

The other day a teenage friend dropped by; she had a health problem she was embarrassed to discuss. I handed her both books and let her read the stories of women from the US and from India who’d gone through the same “shameful” experience she described. “Other women have had this’” she exclaimed. “Do they have an e-mail ID or an address’” she asked. “Maybe I’ll write and tell them about my experience. You know, just in case it’s useful.”

This is how it works. We get comfortable, we start talking, we share and we help other women. All we need is someone to invite us to sit down at the table and begin.

In 2007, another leading Indian newspaper, The Hindu, addressed the value of Anveshi’s publications in the aftermath of bans on sex education in states across the country. Offering background on the original text (on which Anveshi’s materials are based), Kalpana Sharma’s article, “Survival Tools,” emphasized the damaging effects of withholding information on sex and sexuality from women and girls, adding that Anveshi’s books “are important because they give women the tools to understand their own bodies.”

“How can such knowledge be considered obscene or against ‘Indian values’?,” Sharma concluded – a question that continues to be debated and debunked when women and girls have access to the information and services they need to make informed decisions about their bodies and lives.