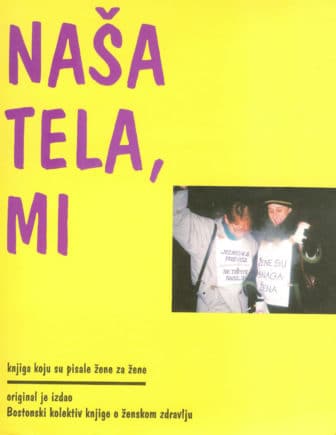 Translation: Our Bodies, Ourselves

Women’s Health Promotion Center (WHPC) published a Serbian adaptation of Our Bodies, Ourselves in 2001, with a print run of 1000 copies. The book focuses on sexual violence and the physical and psychological trauma suffered by women during conflict.

Funding was provided by several sources, including an anonymous individual donor whose support resulted in the distribution of 200 copies to ethnic minority communities in Bosnia-Herzegovina.

As a result of its focus, the book is designed like a journal, with blank space on each page, so readers can record experiences and share copies — and stories — with one another.

The book is also different from the original text in other ways. For example, the “Eating Well” chapter from an early U.S. edition was omitted, given the poverty and number of Serbian people living in starvation during and after ethnic conflict. And it includes a new chapter on violence, based on the specific experiences of Serbian women and girls.

Stanislava Otasevic, co-founder of the WHPC and co-author of the Serbian adaptation of Our Bodies, Ourselves, authored the only manual for health workers in the country, and led a WHO multi-country study on violence. She also serves as an educator and lecturer.

Otasevic attended OBOS’s 40th anniversary symposium in 2011 and took part in a panel on building power and brokering change, which can be viewed online.

The Women’s Health Promotion Center is a non-government organization working on women’s health and the health consequences of gender-based violence.“This book should be given to each daughter by her father.”
– Printer of the Serbian adaptation Established in 1993, the organization was first set up as the Women’s Health Program at the Autonomous Women’s Center Against Sexual Violence before becoming an independent organization.

The Serbian adaptation of Our Bodies, Ourselves has reached thousands of women through community-based workshops, trainings and discussions, as well as distribution via book stores, women’s groups, government agencies and other allies. A DVD version is also available.

WHPC has drawn public and government attention to women’s health, making it central in social and health policy. Successes include the development of a screening protocol and questionnaire on domestic violence, the first of its kind in Serbia and now part of routine medical evaluations, along with community-based outreach across more than 20 cities and accreditation from Serbia’s Health Council as a primary trainer of healthcare providers on gender-based violence.

Read Anna Bogic’s 2017 Ph.D. dissertation on the project: Our Bodies, Our Location: The Politics of Feminist Translation and Reproduction in Post-socialist Serbia. With the completion of dozens of outreach projects for survivors of sexual violence and internal displacement, as a specific consequence of war, WHPC is a vital resource for communities ravaged by ethnic conflict. It continues to collaborate and advocate for greater attention to the health and human rights of women and girls, and build a Serbian community where women live without fear of violence and have equal access to health and supportive care.

The organization also developed an action plan on promoting women’s health that has been incorporated into the country’s national response on gender equality, special guidelines on protecting and supporting women exposed to violence, now used by the Ministry of Health, and a WHO Multi-Country Study on Women’s Health and Violence Against Women.