Building on the 2001 meeting in the Netherlands, OBOS Global Network members used the opportunity of the 9th International Women and Health Meeting in Toronto in 2002 to present their cultural adaptations of Our Bodies, Ourselves to the wider women’s health community. Their IWHM workshop featured two segments: The Transformation of Our Bodies, Ourselves Worldwide, and A Book as a Tool for Action. Network members also organized an internal meeting to share strategies and plan for the future.

Women’s groups throughout the world have created their own editions of Our Bodies, Ourselves. The individuals who work on these projects collectively comprise the OBOS Global Network. OBOS Global Network members participated in two meetings at the 9th International Women and Health Meeting held in Toronto in August 2002.

The first was a morning presentation given by Network members for conference attendees, and the second, an afternoon gathering for those women already involved in translations and adaptations, or planning for the near future. The following is a summary of the morning program and afternoon meeting. 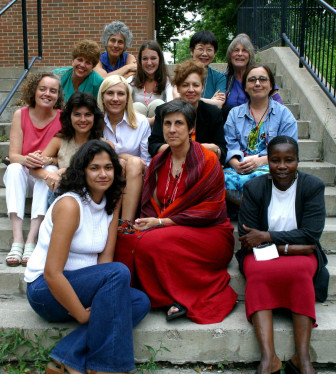 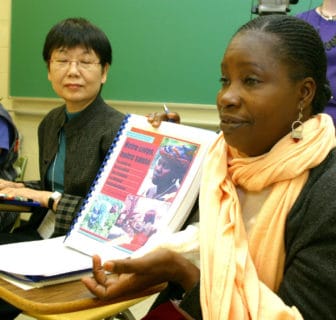 Codou Bop from the Groupe de Recherche sur les femmes et les lois, Senegal, held in her hands the handsome book she has worked on for so long, “Notre Corps, Notre Santé,” the first of its kind to come out in Francophone Africa. Inspired by Our Bodies, Ourselves, it differs greatly in its social, political and economic contexts. It began as a book written by professionals with medical training. The perspective of these women was very different from the concerns of lay women and their lives and work at the grassroots level. Eventually, a women’s group took over and transformed the book, which now takes into account how African women are shaped from the day they are born. Some distribution concerns are that most of the women in the target groups do not speak French, and that it must reach into Africa and beyond to immigrant women in the United States, in Haiti and in Montreal, among other places.

Alona Dorosh from the National Women’s Studies and Information Center, Moldova, was proud of her country’s new independence. They translated both Our Bodies, Ourselves and “Sacrificing Ourselves for Love,” the latter a direct translation, the former adapted, medically focused, and structured to fit Moldovan reality. They were able to give one book free of charge to every women’s NGO in the country. The translation process was pleasant and easy, and they had a good relationship with their publisher.

Joanna Puzewicz from Network of East-West Women – Polska, Poland, hopes their book will come out in 2003. There will be seven sections including medical procedures, sexuality, reproductive rights and older women. The politics will of course be adapted to Polish women’s needs. In this post-communist society, women and girls have little information and have serious medical problems. In this Catholic country, it is difficult to publicly discuss issues such as abortion, so topics in Our Bodies, Ourselves are sometimes quite controversial. There’s a great lack of respect in maternity centers for birthing women.

Some of the group’s special achievements include the following: By the end of June 2002, a series of leaflets as well as a network of Polish women’s organizations had been created; a popular singing star is donating the equivalent of $1.00 (U.S.) on each sale of her current CD; NEWW is making good use of the Internet for distribution of materials, evaluation, and feedback, with a spectacular website that contains a calendar in Polish and English as a tool for political action. In Poland, even rural women have access to the Internet, supplied by the government, and every year, more people get access.

Marlies Bosch spoke about the Tibetan Nuns’ Project in India. There are thousands of refugee nuns throughout India and Nepal. They have had little education and are very eager to learn. Some topics of particular interest to them are: their own culture, issues from the world outside the nunneries, celibacy, growing older, hygiene (it is necessary to cook meals for hundreds of people) and health problems related to their spiritual practice, such as sitting for long hours in zazen. There is a centuries-old history of Tibetan medicine to be learned and assimilated. Some nuns have already been trained to be health workers, and they will teach other nuns. The goal of this project is to create pamphlets on each subject, perhaps with one version for Tibetan women and the other specifically for the nuns.

Miho Ogino from Shokado Women’s Bookstore, Japan said that the owner of Shokado translated and published 6,000 copies of the Japanese language Our Bodies, Ourselves in 1988. Over a period of three years, about fifty women participated on a voluntary basis. Though it’s out of print, it’s not out of date or forgotten. Each women’s center and library has a copy. It is encouraging and stimulating for lesbians and for women with disabilities and has become an inspiration for other groups in all areas. Many good new books have since been written. The former atmosphere of shame and secrecy has been dispersed to a considerable degree. Many changes are taking place in institutions, and the individual members of the translation/adaptation teams have been profoundly affected personally, viewing themselves in a more positive and loving way. They have also translated “Sacrificing Ourselves for Love,” another precious experience of participation.

Leda Avramova, from the Women’s Health Initiative in Bulgaria has a translated, adapted Our Bodies, Ourselves that is one year old. Working on it was an enriching experience and also illustrates how such a book can make a swift journey into the world and be transformed. They added some chapters, including one on the Bulgarian women’s health movement and one on resources, and they shortened others, consulting with members of the medical profession. The process took two years. Although there are images of Bulgarian women in the book, it contains few women’s voices, as the SOROS grant they received meant strict deadlines for finishing the project. They hope to expand both the number of images and personal experiences. They see the current book as a basis for dialogue, placing the validation of personal, individual knowledge within the context of feminism and Eastern Europe, and discussing women’s NGO organizations, minority rights and the minority communities (the Roma constitute 10 percent of the population and they are the most vulnerable, with limited access to health care). Already in existence for spreading the word are community centers and reading houses, the Chitalishte – formed in the 1850s, considered by the UNDP as a “national treasury,” and used as a women’s meeting place.

Marcia Good Maust, Fellow at the Center for Women’s Intercultural Leadership (CWIL), Saint Mary’s College, Notre Dame, Indiana has worked with Zobeida Bonilla from OBOS in using “Nuestros Cuerpos, Nuestras Vidas” (NCNV) in the initiation of a pilot project for the NCNV- based training manual in South Bend, Indiana. Saint Mary’s College, in conjunction with Memorial Hospital and Saint Joseph’s Regional Medical Center (two local hospitals), are now collaborating in this project which takes place at a local Hispanic Outreach Center – “La Casa.” The group of women, who now refer to themselves as “Las Comadres” come from Venezuela, Colombia and Mexico, among others, so there is great diversity of language and of age which brings great richness to the dialogue.

Marcia noted that the presence of older women who participate vigorously in the group gives a kind of permission for the younger women to share information. Ongoing issues are the struggles and strengths of working with hospitals (and their tendency to bring in materials that are condescending in their stereotypical attitude towards Latinas, such as “Latinas are very prudish and only want to be with their families”). A few other struggles have been how to use these guides and talk about women’s rights in a Catholic context, how to help women become aware of superior/inferior attitudes between them that are caused by class differences, and how to improve communication between mothers and daughters.

Emine Filiz Ayla from Mavi Kalem, Turkey, had several informative handouts complete with facts and figures about women in Turkey. To complement them, in her talk she reported that there is absolutely no sexual or reproductive information in schools. Women learn from friends, mothers, older relatives, and the media. Most women believe that their hymens are closed and that athletic activity damages the hymen. Menstruation is considered to be dirty or an illness. Although abortion was legalized in 1983, women can still be seized for performing them and having them. Turkish women have had contraception since 1965. Most women’s groups there do not consider women’s health problems to be a political issue. However, Mavi Kalem wants to create a women’s health book since health affects every aspect of life, and knowledge increases the potential for change. It will bring a wide range of information together, inform younger women and serve as a permanent reference point.

Lea Melo and Monica Maia, from MUSA (Mulher e Saúde), Brazil. The group was founded in 1989. In the beginning, they used the first edition of Our Bodies, Ourselves in many women’s groups. MUSA’s history is close to the book’s history. Other groups have considered translating Our Bodies, Ourselves into Portuguese, and it is now the turn of MUSA. They want to adapt it to their culture and their needs. Brazil is a huge country with many different cultures. The book will be huge too. One organization will not be enough to create and distribute the book; they must put many organizations together. The most important thing is to offer a strong political perspective and to fight against the medicalization of women’s bodies. They have already produced booklets with the idea that knowledge is not only technical, but political. There are class and regional differences in Brazil, and many feminists involved in the Ministry of Health end up being co-opted by the government in power. The audience for the book will not only be Brazilians, but women in Africa and Portugal.

Renu Rajbhandari, a physician from Nepal, said that she had been working with thousands of women throughout the country and had developed several training modules using content from Our Bodies, Ourselves. She thought she might adapt the whole of Our Bodies, Ourselves, for women’s health trainers and workers.

Afternoon Meeting of the OBOS Network

In assessing the morning’s workshop, the OBOS Global Network members remarked that it was informative, productive, and brought many issues to light. These issues revolved around two broad areas: organizations involved in book production and the books themselves.

A discussion of the pending Brazilian and Turkish editions prompted questions around content and audience issues for each translation/adaptation. These issues include the following: