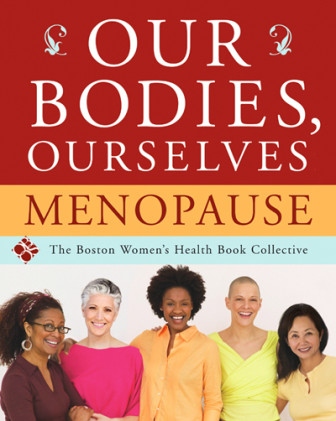 Introduction to “Our Bodies, Ourselves: Menopause”

The first newsprint version of “Our Bodies, Ourselves” — the groundbreaking book about women’s health — did not even mention menopause. Back in 1970, sexuality, birth control, and childbearing were the main concerns of the book’s authors, most of whom were in their 20s. When the Boston Women’s Health Book Collective did decide to include menopause, in the 1973 edition, the mother of one collective member helped write the new section.

Since then, “Our Bodies, Ourselves” has evolved into a comprehensive book for women at every stage of life, covering issues such as body image, relationships, and violence against women.

While producing the 35th anniversary edition of “Our Bodies, Ourselves,” the editorial team realized that several topics covered in a chapter or two in the “mother book” were ripe for more in-depth treatment. One of these was menopause. We decided to create a new book devoted entirely to the health concerns of women going through this transition. The result is the book in your hands now.

Like “Our Bodies, Ourselves,” this book features women speaking from our own experience. It also combines trustworthy medical information based on the best available evidence and thoughtful analysis of the social, cultural, and political forces affecting our health, just as “Our Bodies, Ourselves” does.

“Our Bodies, Ourselves: Menopause” is distinctive among current books on menopause in its rejection of the medicalization of women’s natural life transitions; its evenhanded consideration of all treatment options, whether “conventional” or “alternative”; and its focus on understanding individual women’s health in social and political context.

While emphasizing that menopause is a natural process, not a disease to be treated, and that most women have a relatively easy time with the transition, this book does not deny the real challenges that some women face. Rather, it sifts through the evidence, offers illustrative personal narratives, and provides the best information available to help women make educated health care decisions.

This book gives individual women tools to take care of ourselves during the menopause transition, from tips on eating well and becoming more physically active to strategies to cope better with stress. It provides helpful, clear information about signs of menopause that women may experience, such as hot ashes and vaginal dryness. Because most women experience menopause at midlife, and menopause is often associated with other health concerns of midlife and aging, this book covers those issues, from heart disease, osteoporosis, and cancer to problems of memory and mood.

But “Our Bodies, Ourselves: Menopause” is about more than self-help. It puts our individual choices in social context. Many factors, from pharmaceutical companies’ inuence on medical research and training to society’s ageism and sexism, are beyond an individual’s control. We can change these conditions only by advocating with others for policies and programs that protect the health of our families and communities.

Throughout this book, women share their menopause experiences. Some of these first-person stories are told anonymously, set off in italicized passages in the text. Longer stories are set apart from the main text in boxes, with the name and photograph of the woman telling her story.

The inclusion of diverse voices is also embodied in the all-embracing “we” of this book. The “we” refers to all women, whatever our racial, ethnic, and class backgrounds, countries of origin, sexual orientations, or gender identities. The choice to refer to women as “we” rather than “they” respects the early decision of the Boston Women’s Health Book Collective to change the title of its book (initially “Women and Their Bodies”) to “Our Bodies, Ourselves.”

By speaking about women’s bodies with the voice of personal experience, referring to “our bodies” rather than “their bodies,” the book rejects the distancing voice of some medical texts. It celebrates that this is a book written for and about women — and primarily by us.

With the publication of “Our Bodies, Ourselves: Menopause,” we are launching a series of books that consider specific topics in women’s health in greater detail than it is possible to do in “Our Bodies, Ourselves.” Our next project will be a book on childbearing, an issue that has been central to our advocacy for women’s health from the very beginning. We hope that the titles in this new series will complement and expand on the work of our original book, which has been translated into 20 languages and has sold more than 4 million copies over the decades.

In preparing this book, we have collaborated with a wide-ranging group of contributors, who wrote and reviewed sections based on their expertise. We offer our thanks to them for their dedication and hard work. We also owe a great debt of gratitude to everyone who has contributed over the years to “Our Bodies, Ourselves” and to the organization that produces it, particularly the founders, staff, and volunteer board members.

In addition, we want to acknowledge the trailblazing work of founder Paula Doress-Worters and Diana Laskin Siegal on “Ourselves, Growing Older,” a comprehensive guide to women’s health after age 40 that was first published in 1987.

Women of all ages now have greater access to information about our bodies, health, and medical care than was imaginable back in 1970, thanks in large part to the efforts of these pioneering advocates of women’s health. We are proud to carry their mission forward with this new project.