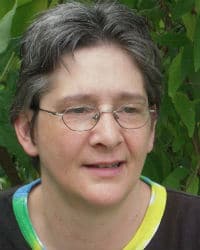 Esther Morris Leidolf is the author of “The Missing Vagina Monologue.” She is the founder of the the “MRKH Organization” and was the board secretary for the Intersex Society of North America.

Her articles about her experience with MRKH have been published internationally. Esther also appears in the recent documentary “Intersexion,” a feature documentary exploring the human side of living with Intersex conditions.

She has been a facilitator at all the the MRKH Conferences at Children’s Hospital Boston and has presented at colleges, universities and medical conferences across the United States.