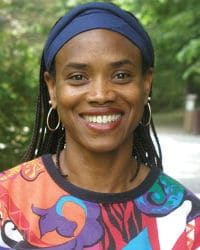 Irene Monroe is an ordained minister, a motivational speaker, a weekly radio commentator on “All Rev’d Up” on WGBH, a Boston NPR station, Huffington Post blogger, and a syndicated religion columnist.

Her columns appear in 43 cities across the country and in the U.K. and Canada. And she writes a weekly column in the Boston home LGBTQ newspaper, Baywindows.

Monroe states, “As a religion columnist, I try to inform the public of the role religion plays in discrimination against lesbian, gay, bisexual, transgender and queer people. Because homophobia is both a hatred of the “other” and it’s usually acted upon ‘in the name of religion,’ by reporting religion in the news I aim to highlight how religious intolerance and fundamentalism not only shatters the goal of American democracy, but also aids in perpetuating other forms of oppression such as racism, sexism, classism and anti-Semitism.”