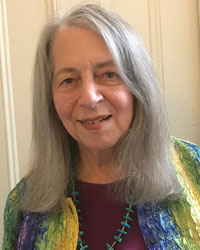 She has served on the OBOS Board of Directors as a founder-member and is now the liaison to the Our Bodies Ourselves Founders Group.

Joan has been a geriatric social worker since 1985, a profession compatible with her social justice values. Her focus has gradually transitioned to issues of aging and older women and families. She was an active caregiver for her mother for the last 10 years of her mother’s life.

Joan was awarded the Knee Wittman Lifetime Achievement Award from the National Association of Social Workers Foundation in June 2016. She was also awarded the Alumni Special Recognition Award by the Simmons School of Social Work Alumni Association in 2012 and the Lifetime Achievement Award by The Massachusetts Chapter of the National Association of Social Workers in 2013. She is always combating sexism and ageism and fostering positive aging and the vitality of feminist values in her writing, clinical work, teaching, speaking, workshops and advocacy.

Married to her husband, Bruce, since 1967, she has two married sons and three grandsons. She loves being a grandmother.