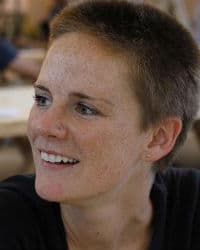 Her work has appeared in Canadian, American, South African, and European publications. In 2010, she won a Mondi Shanduka award, the highest honor in South African journalism, for her work on acid mine drainage in the Mail & Guardian, where she reported on environment, health and culture. She is currently the D.C. bureau intern for The Nation magazine.

Mara previously worked for health organizations, namely the Treatment Action Campaign and Doctors Without Borders in Cape Town, South Africa. She is from Olympia, Wash.