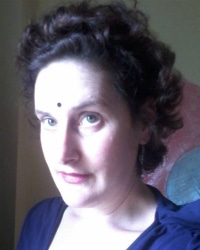 I remember the first time someone called me racist. A motorcycle courier, picking up a package from my work, had twigged that the Malay chap who had just stormed out was, in fact, my ex-husband. And that the guy I was seeing was Palestinian.

“You’re racist, you are,” the motorcyclist declared, offended on behalf of every white man, ever. “You’re the worst kind of racist: You’re racist against your own kind.”

“Yeah you are!” Visibly annoyed, the motorcyclist was stridently outrage. “You don’t go out with white men! That makes you racist.”

He said it the same way you’d say to someone “you have four limbs, that makes you a tetrapod.”

It was several years before I realized why I preferred to date, have sex with, marry, and have babies with men who aren’t white-skinned. I thought my preference for darker-skinned men was just an attraction to the exotic (before I’d heard of, or read about, postcolonialism, obviously!). I also understood my lack of interest in white men as a desire to rattle the gene bag, and ensure that the possibility of passing on certain genetic conditions to my children would be eliminated.

Eventually, I realized why it is that I actively choose to be with non-white men. And it’s not because I’m racist; it’s because I’m scared.

Every time I get to a certain point in a new relationship, I realize I’m going to have to have The Talk. I resent it. I resent that I can’t just shake off the yoke of trauma, and embrace what life has to offer me. I resent that – even after years of different types of therapy, and education, and years between me and the trauma, I can’t just get on with it. I can’t just be normal.

From my understanding, normal people decide they like each other, negotiate a bit, set the scene, obtain and ensure mutual consent, and go and have sex. I can’t do that.

With a man that I’m hoping to see more than once, I wonder whether or not to say anything. I mean, if I start “that” conversation, am I a drama queen? Am I looking for attention? Am I refusing to move forward? Am I making a man in my present pay for what men in my past chose to do to me? I could say nothing, but I don’t think that’s fair; to put a man in the position where he might have to deal with a sobbing, shaking woman in his bed, and have no clue why.

Then, there is the difficulty of how to broach the subject. I mean, it’s far from sexy to talk about abuse and its aftermath. It’s also not a discussion one wants to get into before getting down and dirty with one’s new paramour. Because – here’s the thing about sexual abuse – it’s not sexy.

So when is the right time to mention it? Like burritos, this conversation is not the stuff of first dates. Or of second dates. But then, of what date, exactly? Which number date is the one where you talk about how years of abuse has thoroughly impeded your ability to react normally?  When should you bring it up? And what do you say? And how do you say it?

Over the years, I have formulated a phrase that works well.

“I have difficulty accepting pleasure,” I will tell the hapless male who is desirous of a bit of carnal delight with me. If he wants to know more, he can ask. It’s easier if the man isn’t white. It’s easier again if he isn’t Irish.

I don’t know if you know this, but Irish men have a way of clearing their throats that is peculiar to Irish men. It’s a staccato sound that starts mid-throat, around the back of the Adam’s apple, and is completed with an open mouth. One of my brothers does this – makes this sound – a lot. If I’m with another man – even just having a conversation – and he does the same thing, I cringe, my body tenses up. My sphincter muscles involuntarily contract. I am right back there.

“There” being a child whose body is being prodded and poked and touched and stroked and stretched. And penetrated. With fingers that have nails that need to be cut. Or at least filed. Nails that scratch and scrape, on fingers the plunge and delve. Penetrated with penises slathered in Vaseline, that jab and then press on with determination, while you – while I – a child of ten or eleven or twelve hold your – hold my – breath. And tense up and cringe and feel at once disgusting and disgusted. Until feeling is too hard, so she (so I) removes herself (remove myself) from that physical experience and pulls herself (pull myself) up and out and away somewhere else. Anywhere else. Up and out through the top of the head. Slightly aware of what is going on, but still far enough away to not feel directly involved.

I hope that “I have difficulty accepting sexual pleasure” is enough of a warning that if I should beg him to stop touching me in a certain way because I can’t take the pleasure, because I can’t figure out where, exactly, that much pleasure is meant to go, he will stop. Even if he cannot comprehend that I don’t feel big enough to contain that much pleasure. That I am afraid of it.

I wish I wasn’t afraid. I wish I could push through that feeling of “too much” and find out what’s on the other side. Find out what happens if I move beyond feeling that I might shatter into thousands of tiny pieces if the pleasure is not ceased immediately. Usually, the pleasure is not so great that I fear I can’t handle it. There are still problems, though.

It’s a wonderful thing to be highly orgasmic – to be able to orgasm from just kissing, from just breast stimulation, from (frankly) just thinking about sex. It’s a terrible thing to be highly orgasmic and to be a survivor of sexual abuse. I present as a fit, healthy woman in her 40s, with a healthy sexual appetite, a libido that is none too shabby. This would be well and good if orgasms didn’t brutalize me.

After an orgasm – and I mean a nano-second after – I feel so terribly bad. I am overcome with guilt, overwhelmed by self-disgust, drowning in a sense that I have done something terrible, shameful, and reprehensible. So much so that I end up in tears, sobbing. Who wouldn’t feel sorry for the poor man who ends up in bed with that? Actually, the men don’t always notice. Often, they ignore me, which makes me feel as though my disgust and self-loathing are well-deserved. As if he is as disgusted with me as I am with myself.

A very long time ago – when I was between my first and second husbands – I had a lover. He was about five years younger than I was, and loved sex just as much as I did. We were friends with benefits – and there was more of the “benefits” bit than the “friends” bit. Anyway, his attitude to me and my difficulty with sex was wonderfully pragmatic and simplistic: Given that I had had so many negative sexual experiences which left me feeling bad about sex itself, what I really needed to “correct” my situation was to have lots and lots of good sex. Eventually, the good would outweigh the bad, and sex would be nothing but pleasure for me, he reckoned. It was definitely a plan, and I had a willing accomplice, so I took it seriously – like an academic exercise, or a work project. I attacked it with gusto. We had fun. We had lots of fun, but never quite managed to achieve the results we were hoping for. Of course, this experiment was aided by the fact that he was neither Irish nor white.

But I’m not racist. I’m broken.