Menu
Home > Our Impact > Our Bodies, Our Blog > “Educate Congress” Accomplished: Every Member Now Has a Copy of “Our Bodies, Ourselves”

“Educate Congress” Accomplished: Every Member Now Has a Copy of “Our Bodies, Ourselves” 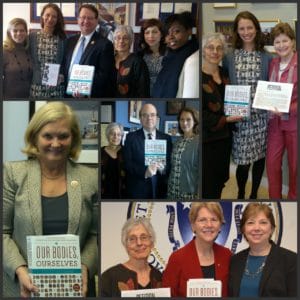 Every member of Congress has pages of accurate information on women’s health at their fingertips – more than 900 pages to be exact – now that they have the latest edition of “Our Bodies, Ourselves.”

Thanks to supporters of OBOS’s Educate Congress campaign – inspired by a road trip to deliver “Our Bodies, Ourselves” to then-Rep. Todd Akin – we hand-delivered or mailed the newest edition and a letter signed by prominent health policy experts to all members of the U.S. House and Senate.

Educate Congress launched with a simple premise: Everyone deserves access to accurate information concerning women’s reproductive and sexual health – especially those who write the laws.

Deliveries began Feb. 28, when I spent the day meeting with members on Capitol Hill. It was the day that the House finally passed the Violence Against Women Act, which made the trip particularly poignant.

Joining me were Christy Turlington Burns, founder of Every Mother Counts (EMC), and Erin Thornton, EMC executive director. We collaborated on scheduling and delivered EMC materials along with “Our Bodies, Ourselves,” including a special petition for women members of Congress congratulating them on their leadership role and asking them to affirm support of policies that protect the health and well-being of girls and women around the world, especially those that will reduce infant and maternal mortality rates.

Two National Women’s Health Network (NWHN) interns, Alysson Reddy and Grace Adofoli, provided invaluable logistics support and shoulder-bag transport of the rather hefty copies of “Our Bodies, Ourselves.” We received warm receptions not only from those who know the book and OBOS’s work, but also from members who want to be better prepared to address key reproductive health concerns.

Our first meeting was with Rep. Jim McGovern (MA), a consistent advocate of evidence-based policies. Christy and Erin presented a copy of EMC’s excellent documentary about maternal mortality, “No Woman, No Cry.”

The day ended on the Senate side, with visits to Senators Jeanne Shaheen (NH) and Elizabeth Warren (MA). Diana Zuckerman, president of the National Research Center for Women and Families (NRCWF), joined me in discussing women’s health with Sen. Warren and her chief of staff, Mindy Myers.

OBOS has already received personal thank-you notes from several members of Congress who indicated that the book will be a useful resource. We’re confident it will be of value to staff members working on policy issues.

If you visit the D.C. office of your representative or senator in the coming months, let us know if you get a chance to ask about how “Our Bodies, Ourselves” might have been referenced. Establishing sound, science-based policy about reproductive health is no easy feat, but it will be all the more likely if each of us finds ways to promote this goal.

OBOS will continue to monitor where information interventions are needed. Please help fund our efforts to send books to state legislators, educational leaders, and other public officials.