Menu
Home > Our Impact > Our Bodies, Our Blog > Why Healthy Premenopausal Women Do Not Need Bone Density Scans

Why Healthy Premenopausal Women Do Not Need Bone Density Scans 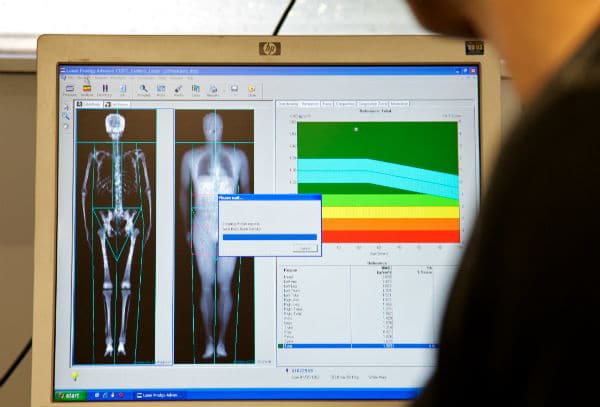 A full-body scan appearing on the screen of a computer linked to a DEXA scanner / Nick Smith photography - ALSPAC (CC)
By Rachel Walden | August 29, 2014

Ads that promote products to prevent or treat osteoporosis are all too commonplace, causing many premenopausal women to believe they need to undergo screening as the first step toward protecting their bone health.

Next time you encounter one of these ads, however, remember that most healthy young women do not need a DEXA bone density scan.

DEXA (or DXA) stands for dual-energy x-ray absorptiometry. It’s a fancy way of saying that the scan is a low-dose x-ray, often of the spine and hip, that looks at the density of your bones. These are sometimes just called a bone density scan. Given how much information women encounter about bone density, it’s not surprising that many women ask their doctors about the scan, or agree when the scan is offered.

Yet many women who receive these scans don’t need them. Not only might the scans be a waste of money, but they can lead to other interventions, such as being prescribed unnecessary medication that may be associated with dangerous side effects.

Many organizations have started to recommend against routine DEXA scanning in women younger than 65 (or men younger than 70) with no risk factors. One of the most respected groups to weigh in is Choosing Wisely, which is known for putting together lists of procedures and treatments that doctors and patients should question and avoid, based on guidance from professional medical organizations and reviews of the evidence.

According to advice provided by the American Academy of Family Physicians, along with Consumer Reports, that has been added to Choosing Wisely’s website:

A DEXA scan isn’t likely to harm you directly. But a diagnosis of osteopenia can lead to treatment with such drugs as alendronate (Fosamax and generic), ibandronate (Boniva and generic), and risendronate (Actonel, Atelvia, and generic), which pose numerous risks. Those include thigh fractures; throat or chest pain; difficulty swallowing; heartburn; and more rarely, bone, eye, joint, and muscle pain; bone loss in the jaw; and possibly abnormal heart rhythm.

In addition, there is little evidence that people with osteopenia get much benefit from the drugs. Other types of osteoporosis drugs are linked to risks such as blood clots, heart attacks, strokes, and serious infections.

Choosing Wisely’s careful review makes it a trusted, high-profile starting point for physicians who want to reduce unnecessary interventions and costs. Now that it is calling attention to unnecessary bone density scanning, hopefully more clinicians will reconsider their use in younger women.

Other organizations have also raised concerns about DEXA scans. The National Osteoporosis Foundation, for example, says the decision to undergo screening should be “based on an individual’s fracture risk profile and skeletal health assessment” and should never be done “unless the results will influence the patient’s treatment decision.”

Clinical risk factors that might encourage a younger, premenopausal woman to consider a scan include having a parent with a hip fracture, exposure to glucocorticoid drugs, low body weight, cigarette smoking, excessive alcohol drinking, and certain diseases.

A previous evidence review found that scanning is generally useful for postmenopausal women age 65 and older, as risk of fracture increases for women as they age. The American College of Preventive Medicine and the U.S. Preventive Services Task Force came to similar conclusions after reviewing the evidence on screening for osteoporosis.

While these recommendations have gotten more attention since the start of the Choosing Wisely campaign on bone density scans, this information is not new to many women’s health activists. In 2011, Cindy Pearson of the National Women’s Health Network wrote:

Unless you have a serious medical condition that creates fragile bones, or a very strong history of fragility fractures in your family, do not get a BMD test before you’re 65. If you’re White, you’re likely to be diagnosed with “osteopenia”, a condition that means nothing more than that your bones are less dense than the average 20-something’s. If you’re a woman of color, you’re likely to get a number that doesn’t tell you or your clinician anything at all, since women of color were left out of studies manufacturers used to define “normal” BMD. If you’re over 65, the age at which the U.S. Preventive Services Task Force recommends BMD screening, you can take stock of your own risk factors and make an informed decision.

In a more recent (July/August 2014) edition of the NWHN’s newsletter, physicians Charlea T. Massion and Adriane Fugh-Berman offer support for the Choosing Wisely recommendation and provide several tips for keeping your bones healthy, including regular exercise and avoiding smoking.