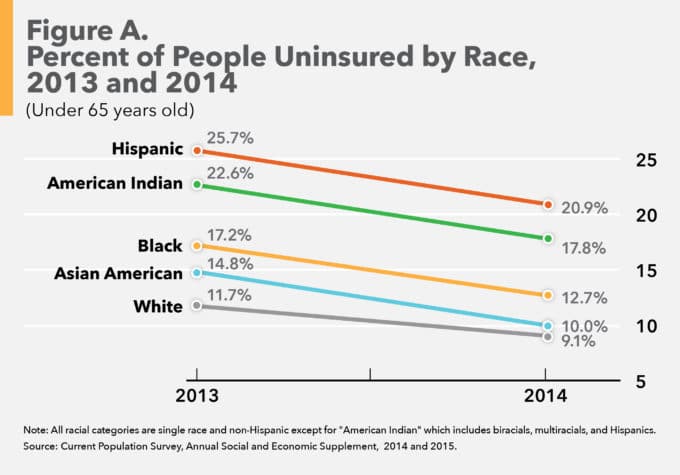 All racial groups have experienced substantial increases in their health insurance coverage. Before the ACA was enacted, people of color were much more likely to be uninsured than Whites. Obamacare has reduced these disparities and has essentially eliminated the difference between the uninsured rates of Asian Americans and Whites and of Black and White children.

Health insurance rates matter for a few reasons. First, those without health insurance are more likely to forgo necessary medical care, resulting in poorer health and higher mortality. Second, the uninsured are more likely to be at risk of financial strain due to medical costs, including significant debt and even bankruptcy. “Uninsured low- and moderate-income adults are twice as likely as the insured to use up their savings or go into debt because of medical bills,” states the issue brief. 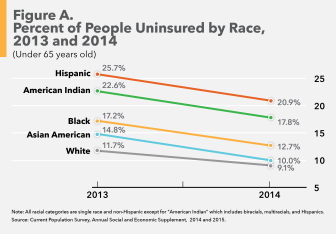 In the table above (click to enlarge) you can see the changes in the number of uninsured people by race, and how it changed significantly in 2014. The report highlights that a few groups closed the disparity gap altogether: Asian Americans and whites and black and white children no longer have a difference in insurance rates, a significant change in such a short time. 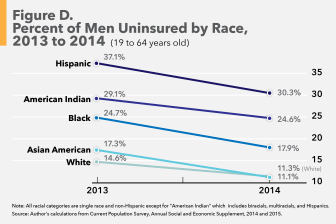 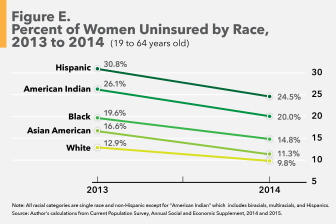 In the two tables above you can see the insurance rates separated by gender and race. All groups made gains in 2014, and you can also see that Asian American men and white men no longer have a difference in rates, while Asian American and white women still have a small gap. Across all the groups, women are less likely to be uninsured than men.

The issue brief concludes by addressing the fact that many of these gains, particularly among people of color, were made by increases to private insurance rather than Medicaid. While private insurance can be an important step in the right direction, those plans may not be affordable over the long term, and may come with high deductibles that still carry the risk of medical-related debt, especially for those who are lower income but not eligible for Medicaid. Complete Medicaid expansion (something only half of states have chosen to do) would likely provide more significant strides toward lowering the uninsured rates even farther, and keeping people out of medical debt.

It’s also important to note that a reduction in health insurance disparities is not necessarily a reduction in health disparities themselves. Even with access to health care, people of color still see gaps in health outcomes, many of which will necessitate larger social, economic and political shifts to solve. And simply having access to insurance does not guarantee the quality of the health care you receive.

Free the Pill! by Guest Contributor May 28, 2020 by Carrie Baker Sixty years ago this month, the U.S. Food and Drug Administration approved the birth control pill for distribution in the United States — a game changer for women’s lives. Before approval of the pill, most women were…
Period Poverty is a Human Rights Issue. Period. by Guest Contributor August 6, 2021 by Hannah Sachs-Wetstone What is period poverty? Let’s talk about period poverty. Period poverty occurs when menstruators cannot access the menstrual products, underwear, and pain medication they need to maintain their menstrual health due to a variety of factors, such…
When Antidepressants Leave Lasting Damage: Living with Post-SSRI/SNRI Sexual Dysfunction by Guest Contributor January 23, 2021 by Emily Grey My clitoris is now no more than an inert and sensation-less nub of flesh. I am unable to feel attraction, arousal or orgasm.… The effects of losing my sexuality have been absolutely devastating to my relationships and…