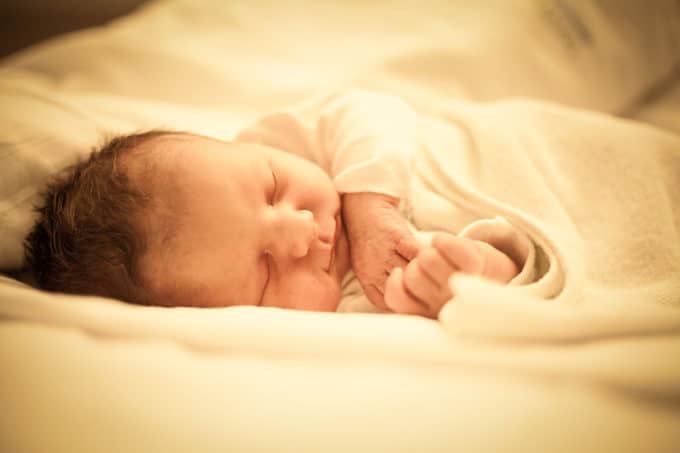 The CDC recently released data gathered from death certificates in 2014, which analyzes different aspects of mortality and life expectancy. One important change in that data from 2013 was the infant mortality rate:

The infant mortality rate (IMR)—the ratio of infant deaths to live births in a given year—is generally considered a good indicator of the overall health of a population. IMR declined 2.3% to a record low 582.1 infant deaths per 100,000 live births in 2014 from 596.1 in 2013.

This decline in infant mortality follows a continued decline since a peak in 2005, reports the New York Times. This is great news. The United States seriously lags behind many other developed nations when it comes to maternal and infant health. While this decrease is a continued step in the right direction, the incredible gap between our outcomes and other nation’s remains. The New York Times:

‘Its good news that the infant mortality rate dropped last year, but it’s still much higher than the average of all the countries in the O.E.C.D.,’ he said, referring to the Organization for Economic Cooperation and Development, a group of developed countries that serves as a close international comparison. ‘In 2013, the rate in the United States was about 50 percent higher than the average rate for those countries,’ he said.

Another important factor to consider when looking at infant mortality is the disparities among racial groups, which the NYT coverage of this change did not address. The 2014 data did not provide a disaggregate of racial groups, but the 2013 data did, revealing a much higher rate of infant mortality for black women, twice that of non-Hispanic white women. That means that a black woman has twice the chance of losing an infant to death than a white woman. 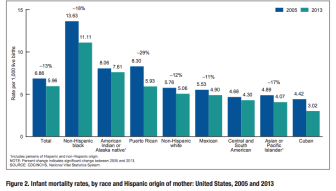 In the figure above (click to enlarge), you can see that the infant mortality rates for all racial groups have gone down since 2005, but the rate for non-Hispanic black women remains the highest, and twice the rate of non-Hispanic white women. American Indian or Alaska Native women currently have the second highest rate. Puerto-Rican women saw the largest decrease in the infant mortality rate from 2005 to 2013.

The NYT addressed some potential causes for the decrease in 2014, including a decline in preterm births and a decline in the c-section rate. If we could see whether there was a bigger decline for a particular racial group, that might also help illuminate the full picture of infant mortality and its potential causes or solutions.

Also, if the decline was primarily in one group, like non-Hispanic white women, then it would indicate that this problem isn’t actually improving for certain portions of our community.

You can see the full CDC findings here.

Adapting “Our Bodies, Ourselves” to Brazilian Portuguese: The Translators’ Experiences by OBOS July 30, 2020 "[H]aving the opportunity of translating … “Our Bodies, Ourselves” to Brazilian Portuguese ... brings me a profound sense of accomplishment, since there is not such a complete book on women's health in Portuguese with so much information and so many…
Free the Pill! by Guest Contributor May 28, 2020 by Carrie Baker Sixty years ago this month, the U.S. Food and Drug Administration approved the birth control pill for distribution in the United States — a game changer for women’s lives. Before approval of the pill, most women were…
Addressing Institutional Racism & Health Inequality: My Perspective by Guest Contributor August 18, 2020 by Diana Namumbejja Abwoye Diana Namumbejja Abwoye is a family nurse practitioner and a member of the Board of Directors of Our Bodies Ourselves who translated and adapted "Our Bodies, Ourselves" into Luganda. Covid-19 has affected all aspects of our…