Menu
Home > Our Impact > Our Bodies, Our Blog > The Push to Reduce Unnecessary C-Sections

The Push to Reduce Unnecessary C-Sections 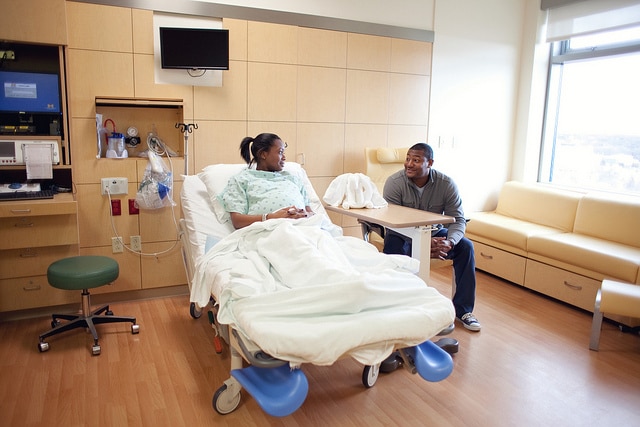 Special thanks to Rachel Breman, Amy Romano, and Carol Sakala for their work on this post.

While cesarean sections are sometimes necessary and even life-saving, in most situations, spontaneous vaginal births are safest for both women and babies. That’s just one reason why we’re celebrating California’s game-changing new commitment to reducing the number of medically unnecessary C-sections.

The state’s insurance exchange, Covered California, recently announced that insurers in the exchange will not be permitted to provide insurance coverage for hospitals with high rates of C-sections — specifically those with rates above 23.9% in low-risk women giving birth for the first time. The new contract with insurers also requires them to adopt a new payment structure with hospitals that ensures there is no financial incentive to perform C-sections.

Covered California’s efforts to reduce the number of C-sections among low-risk women align with the federal government’s push, through the Healthy People 2020 initiative, to do the same. The World Health Organization (WHO) discourages aiming for a target rate. In a statement last year the WHO relied on new studies which reveal that when rates of c-sections are closer to 10 percent, maternal and newborn deaths decrease. But when the rate rises above 10 percent, mortality rates don’t improve. Therefore they recommend focusing on the needs of each individual patient and performing c-sections only when medically necessary.

Covered California’s new policy signals good news for women’s health and for families’ bank accounts. By shining a light on the nation’s too-high C-section rate, the requirement also encourages deeper discussion about how hospitals can better support healthy pregnancy, labor, and birth, especially in low-risk women. It opens the door to offering women more and better support for decision-making about childbirth care and allows the conversation about the benefits of midwifery care for normal, low-risk births to expand.

It also addresses the profit-making incentives for hospitals. C-sections can be as much as double the cost of vaginal births. A report commissioned by Childbirth Connection and partners, “The Cost of Having a Baby in the United States,” documents the results of a study on charges and payments for maternal and newborn care. The study found that combined payments for maternal and newborn care were 50 percent higher with cesarean births versus vaginal births, for both commercial insurers and Medicaid.

While most mothers and babies who have cesarean births do fine, cesarean sections involve more risks than spontaneous vaginal births. Women who have cesarean sections are more likely to have more infections after the birth (usually in the uterus, bladder, or incision, and including infections resistant to antibiotics), more pain, longer recovery periods, and a greater chance of being re-hospitalized. A woman who has had a cesarean section is more likely to have a cesarean section in future pregnancies. As the number of cesareans increases for a woman, the risk of complications in future pregnancies, especially placental problems, also increases.

That’s why the climbing rates of C-sections in this country are concerning. In 1970, five percent of babies were born via C-section in the United States. Today, one out of every three women gives birth via C-section. According to HCUP, it’s the most common operating room procedure for women of reproductive age.

And it’s not because more women are “requesting” the surgery. Despite some media implying that women are “too posh to push,” Childbirth Connection’s Listening to Mothers survey of over 1,500 mothers found that very few women actually “request” C-sections.

It’s also not solely because pregnant women, overall, have become older and heavier, both of which can contribute to a higher risk of undergoing a C-section. Or because the fertility treatments more women are using lead to more births of twins or triplets, which often require C-sections. Rates have gone up among all populations of women regardless of age, income level, the extent of their health problems, race/ethnicity, and the number of babies they are having.

Rather, because of a range of issues — including limited awareness of both the short and long term harms of C-sections, a low priority put on enhancing women’s own abilities to give birth (how many women know that you don’t need to induce labor before the 42nd week of pregnancy, the standard of care in other countries if the pregnancy is healthy) and the refusal of many hospitals to offer the informed choice of vaginal birth (especially after a woman has had a previous birth via C-section) — many women end up with unnecessary C-sections.  A Consumer Reports analysis of first-time mothers with low-risk pregnancies, found that almost half of C-sections performed are done in situations when babies could be safely delivered vaginally instead.

Consumer Reports puts the cause of our increased rates of C-sections in even simpler terms:

While a number of factors can increase the chance of having a C-section—being older or heavier or having diabetes, for example—the biggest risk “may simply be which hospital a mother walks into to deliver her baby,” [emphasis mine] says Neel Shah, M.D., an assistant professor of obstetrics, gynecology, and reproductive biology at Harvard Medical School, who has studied C-section rates in this country and around the world.

The type of provider a woman chooses also can play a role. Midwives are trained to promote physiological childbirth, provide high quality care and often have fewer patients who need a cesarean. Physicians who work collaboratively with midwives also tend to perform fewer cesareans.

In the majority of hospitals in the U.S. (60 percent), a woman who comes in to give birth will have a higher than necessary risk of giving birth via C-section. But the rates vary dramatically from hospital to hospital. In California, some hospitals report a 12 percent C-section rate and others a stunning 70 percent rate for low-risk births.

Covered California is taking its cues from this growing body of knowledge. The policy change plays an important role in helping to shape a new vision for women’s choices in childbirth. One where the hospital a woman births in does not determine the type of birth she will have. If hospitals with high C-section rates are being compelled to examine their own health care practices and whether the traditional “medical model” of care is harming or helping laboring and birthing women, the hope is that a new conversation about the benefits and challenges of different models of maternity care (and new voices–of midwives and doulas) will emerge and be given a larger platform.

Women need access to as much information and support as necessary to make informed decisions about their own labor and childbirth. In the midwifery model of care, the majority of pregnancies, labors, and births are assumed to be “normal, biological processes that result in healthy outcomes for both mothers and babies.” In the medical model, the focus is on  “preventing, diagnosing, and treating the complications that can occur during pregnancy, labor, and birth.”

There is incentive. California-based Kaiser Permanente uses midwives in its hospitals and has some of the lowest C-section rates in the state, according to Modern Healthcare.

Covered California’s new move to exclude hospitals with high C-section rates from coverage is a unique way to compel those hospitals to take a long, hard look at themselves, their health care practices, and their profit-making incentives. Amy Romano, SVP of Baby + Co, explains:

Payers are looking specifically at the c-section rate in low-risk women. This means the policy is not aimed at women who need c-sections for medical reasons. It’s not actually aimed at women at all. It is designed to help hospitals looks at their policies and practices and focus on safely reducing c-section rates. Many hospitals are doing this now and bringing their low-risk c-section rates down with programs like providing doula services, having more patience with slow labors, and reducing unnecessary inductions of labor. This policy will help more women choose hospitals that are implementing these and other evidence-based practices.

The number of women dying during pregnancy and childbirth is increasing in the United States. We know higher C-section rates are not saving lives.

The goal is to find a balance, says pediatrician Ana Langer, professor of the practice of public health and coordinator of the dean’s Special Initiative in Women and Health at the Harvard T.H. Chan School of Public Health, when it comes to standardizing hospital care. Women need to be allowed to have normal deliveries with minimal interventions and feel confident that hospitals will be ready to address any unexpected emergencies, should they arise.

All women, regardless of whether they need a C-section or birth vaginally, deserve greater autonomy and control over their birth experiences. For this to happen, women need access to the full spectrum of facts and information that will allow them to make the best decisions for themselves during pregnancy, labor and birth including increased choice and understanding of the models of maternity care available, the costs related to C-sections and vaginal births, and how medical interventions may impact the kind of birth they are able to have.

A woman’s risk of undergoing a medically unnecessary C-section shouldn’t dramatically increase or decrease depending upon the hospital or health care provider she uses. Covered California has created an opportunity to address this stark reality by letting hospitals with high C-section rates for low-risk women know their medical and financial practices need to change in order to provide the best possible care for women and newborns.