Menu
Home > Our Impact > Our Bodies, Our Blog > #WhyIMarch: Dispatches from the Women’s Marches

#WhyIMarch: Dispatches from the Women’s Marches 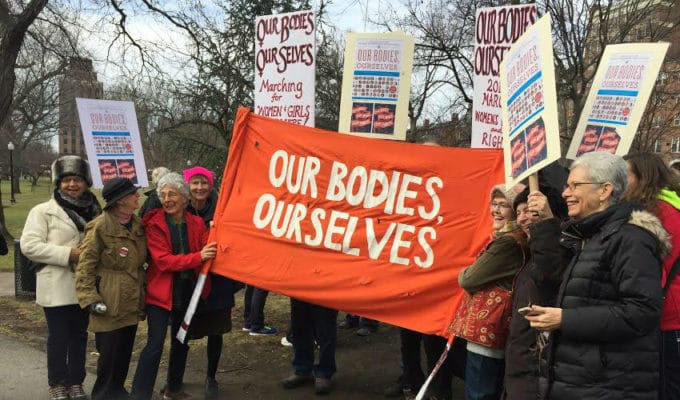 On January 21, 2017, hundreds of thousands of people gathered at the National Mall in Washington D.C. to proclaim that women’s rights are human rights. More than 700 sister marches, with millions of marchers, were held across the country and throughout the world – from India, where women launched #IWillGoOut in response to a recent spate of sexual violence in the state of Bengaluru to Antarctica, where a data analytics and market research professional from California organized a protest for peace and the environment.

Our Bodies Ourselves was one of the many partner organizations supporting the Women’s March. On Saturday, OBOS founders, board members, staff, supporters and friends marched under the Our Bodies Ourselves banner in Washington D.C., Boston, New York City, and Seattle. Below, several of these people share their initial thoughts and musings about the day. Please share your own march stories in the comments below!

As a group of us OBOS folks walked back up Commonwealth Ave around 4:15 p.m., against the oncoming marchers (it took 3 hours before all the marchers were able to start moving!), we were so excited to see the hundreds of people giving shout-outs when they saw the large orange banner and terrific OBOS signs painted by Geneva Cooper (Thanks, Geneva!). Many women ran up to say “OBOS saved my life” and more than a few men shook our hands with a heartfelt thank yous. Thanks, Dan, Jeff, and so many others for carrying the banner for more than 5 hours straight! The strength and fortitude displayed by marchers on Saturday will do us well as we meet the intense challenges of this new administration.

Ayesha Chatterjee, program manager for the OBOS Global Initiative, also marched in Boston:
I remember the first message I received, the day after the election in November, from a friend on Facebook urging me to rally. In the early stages of grieving, I was in shock, deeply despondent, fearful as a person/woman-of-color for my safety and that of my 5-year-old daughter. A march in Washington D.C., two months down the road, seemed overwhelming —  and when it didn’t, I was simply skeptical we would pull it off.

Last Saturday, the day after Trump’s inauguration, I was in Boston — the city I have proudly called home since leaving India in 2005 — shoulder-to-shoulder (seriously!) with roughly 200,000 people who believe in caring for our planet and all the lives it sustains.

The Our Bodies Ourselves family – founders, board, and staff, many with their own families – walked under an Our Bodies Ourselves banner that has witnessed more history and resistance than I can imagine. We joined people of every strength and stripe to peacefully defend principles of freedom, equality, and justice – on issues related to science and education, deportation and immigration, reproductive justice and safe abortion.

Walking down Boston’s Commonwealth Avenue, amid a sea of humanity that chose to come together on a beautiful Saturday morning, holding the hand of my little one — who’s favorite slogan was My Body, My Choice —  I felt a twinge of hope for the first time.

Amie Newman, OBOS blogger, marched in Seattle:
I was proud to march in Seattle yesterday, holding the Our Bodies Ourselves banner, with friends, supporters, and family members. As we marched in a sea of over 100,000 people wearing pink pussyhats and holding white poster board signs, our group was met with excited comments, “Our Bodies, Ourselves! That was my health bible as a young woman!” and “Thank you for supporting women’s health and rights!”

It was a reminder that the work we do — creating and sharing accessible and scientifically accurate on a range of women’s health issues, and advocating for women’s health and rights — improves lives.

Audre Lorde once said, “Revolution is not a one time event.” The historic women’s marches that exploded across the United States and all over the world Saturday were not protests in opposition to one governmental policy or on behalf of one singular movement. They were a message to a new administration: We will fight for the health and rights of all — women, immigrants, people with disabilities, black and brown people, GLBTQ people, and people of all religions. 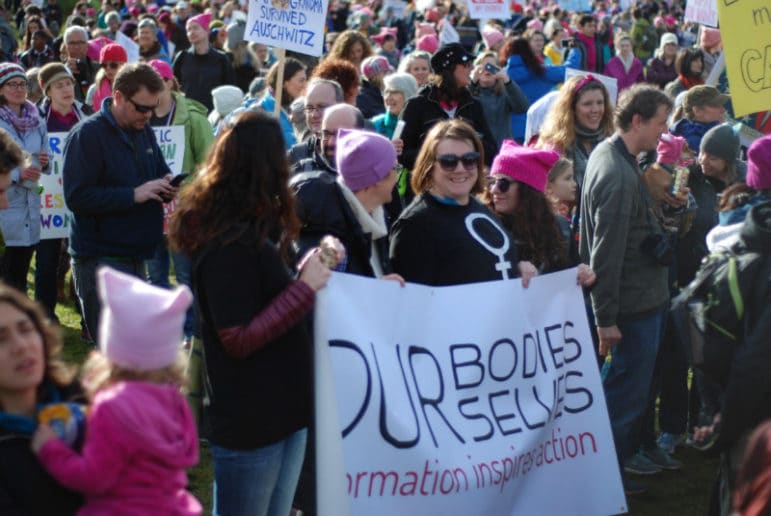 Julie Childers is the executive director for Our Bodies Ourselves. She marched in D.C.
Saturday morning was a challenge. The Washington Metro couldn’t keep up with the riders. People were everywhere. We had set a designated meeting space for Our Bodies Ourselves supporters and board members, but most people couldn’t get there — the number of people made it difficult to move. Cell phone service was out, as well, so checking in was impossible.

Slowly I began to relax and take in the day. We were shoulder to shoulder, shuffling along. I saw a sweet young family pushing a stroller with snoozing babies inside, both wearing miniature pink caps. Marching down Pennsylvania Ave, we chanted “This is what democracy looks like!”

I smiled at a woman holding one of my favorite signs: I can’t believe we still have to protest this sh*t after all these years. People swept us along, helping each other and sometimes arguing in frustration (“where are we supposed to go now?!”) But, we made progress, eventually finishing the march about 7 hours after we first gathered for the rally.

The march was busy, messy, and not perfectly organized. Yet it was powerful and beautiful too. We were loud, and we were clear: we will continue to fight for women’s health and human rights. We won’t go back. 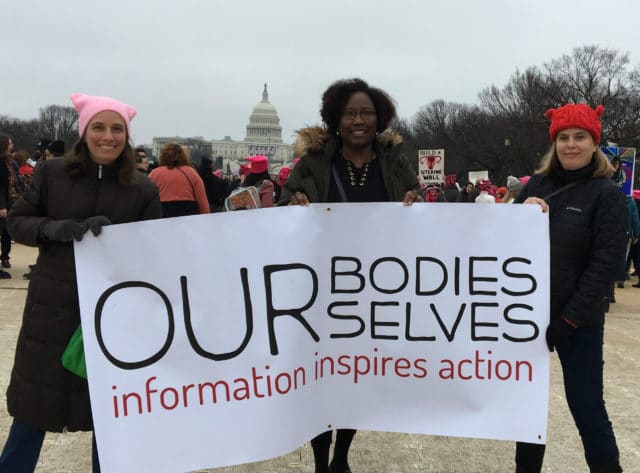 The Women’s March has just launched the 10 Actions for the First 100 Days campaign. Check it out and take action!