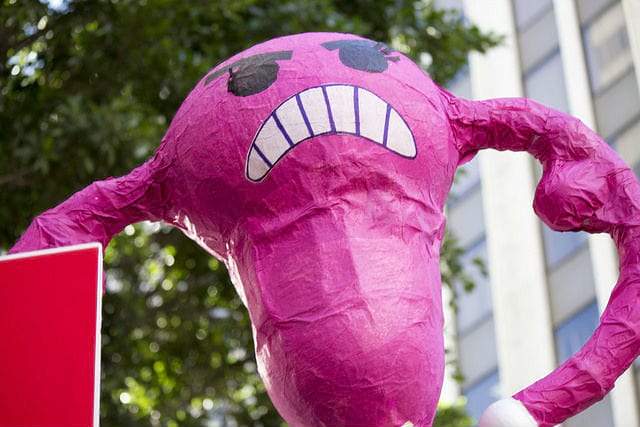 The U.S. Department of Health and Human Services (HHS) has released a draft of its strategic plan for the next four years — and it isn’t pretty. The proposed plan lifts language straight from anti-abortion and anti-birth control advocates, declaring that life begins at conception and the “unborn” are a protected group.  The plan prioritizes “religious liberty” and the rights of providers to withhold reproductive health care over the rights of women to receive such care.

Earlier this year, Trump appointed Tom “there’s not one woman who doesn’t have access to birth control” Price as the head of HHS. Price resigned last month amid criticism that he used hundreds of thousands of dollars of public money to pay for his private charter flights. The strategic plan was published right before Price resigned and clearly has his anti-choice fingerprints all over it. HHS has no shortage of anti-abortion and anti-contraception advocates in its ranks to continue advocating for the strategic plan. Teresa Manning, the anti-abortion head of HHS’s family planning department, has been quoted as saying that contraception doesn’t work.

The introduction to the plan makes its intentions clear from the start:

HHS accomplishes its mission through programs and initiatives that cover a wide spectrum of activities, serving and protecting Americans at every stage of life, beginning at conception [emphasis added].

The same paragraph in the HHS strategic plan under the Obama administration reads:

HHS accomplishes its mission through programs and initiatives that cover a wide spectrum of activities, serving Americans at every stage of life.

The phrase “life begins at conception” was made popular by the “Personhood” movement and is predicated on the idea that fertilized eggs, zygotes, and fetuses should be granted full human rights. When this concept is enshrined in law, it sets the stage to outlaw both abortion and certain birth control methods.  Roe v. Wade expressly notes that, in the 14th amendment, the word “person” does not include “the unborn.”

Still, this is the language of strategic goal #1 in the new HHS plan:

While we may refer to the people we serve as beneficiaries, enrollees, patients, or consumers, our ultimate goal is to improve healthcare outcomes for all people, including the unborn, across healthcare settings. [emphasis added]

The proposed plan repeatedly focuses on religious freedom and the right of people of “faith” and “faith-based organizations” to refuse to provide care. It refers to the Trump administration’s executive order to “protect religious freedom” and pledges to “identify and remove barriers to, or burdens imposed on, the exercise of religious beliefs and/or moral convictions by persons or organizations partnering with, or served by HHS.”

This is the administration’s latest attempt to replace evidence-based public health strategies with ideological “solutions” that strip people of their right to body autonomy. In a similar move, last week Trump essentially ended the Affordable Care Act’s mandate that health insurers cover birth control without a copay, by extending the provision that allows any business or organization, not only religious organizations, to opt-out of covering birth control based on religious convictions.

Want to let the Trump administration know what you think of the draft strategic plan? The HHS has provided a way to do so: leave your comments here.

We need to keep demanding our rights and fighting for the care we deserve.