Menu
Home > Our Impact > Our Bodies, Our Blog > Stopping Keystone: A Victory for Native Women’s Health 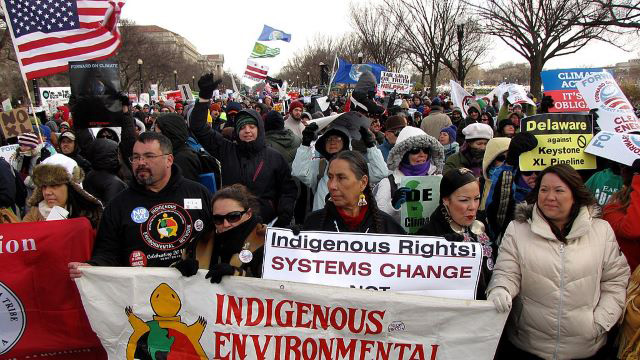 In early June, after more than ten years of conflict, the Keystone XL oil pipeline project was halted by TC Energy, the company behind the project. This is a victory for Indigenous communities and environmental activists. However, the fight for justice is not over.

The destruction of tribal lands is fueled by the assault on Indigenous peoples’ — especially indigenous women’s — bodies. While the halting of the Keystone pipeline is an important step, many challenges remain: the Murdered and Missing Women and Girls (MMWG) epidemic, the ineffective justice system, and the deficient health care system. As activists and advocates for women’s health, we must do more to fight for justice for Indigenous women. Systemic change and empowerment are necessary in this path towards justice after centuries of violence and trauma.

Big oil companies and projects like the Keystone pipeline are extractive and exploitative not only of the environment and the economy, but of Indigenous women’s lives and bodies. Big oil projects bring thousands of workers to under-resourced areas with poor infrastructure but fail to bring investment to local economies and communities. In this way, these projects play a role in perpetuating inequity in the long term. They also bring direct violence to Indigenous communities.

From the 1980s, oil booms and large extraction projects near Indigenous territories have led to increased sexual and physical violence against Indigenous women. These projects bring many transient workers — mostly non-Indigenous and male — within close proximity of Indigenous communities. Anita Lucchesi, a young Cheyenne woman, overheard oil rig workers talking about her: “‘They were saying, ‘Oh yeah, North Dakota is the fucking best; in North Dakota you can take whatever pretty little Indian girl that you like and you can do whatever you want and police don’t give a fuck about it.’” The connection between extractive oil projects and violence against Indigenous women has always been clear to these communities while being ignored by those not directly affected.

This violence is part of a larger epidemic of MMWG in Indigenous communities that is largely ignored. For Native American and Alaska Native women under 45, murder is the sixth leading cause of death and more than one-in-two women have experienced sexual violence. The long history of systematic and epidemic violence against Indigenous women has ranged from sexual assaults perpetrated by colonizers to radioactive contamination of reservations to forced sterilizations. Indigenous women, despite their persistent resistance, have yet to receive justice for these ongoing and systematic attacks. Individual cases go uninvestigated and unreported and the epidemic at large perpetuates fear and insecurity in Indigenous communities.

The MMWG epidemic is sustained and reinforced by an unequal system of justice on Indigenous lands and territories. Complicated jurisdictional laws mean that tribal police cannot investigate or prosecute non-tribe members for crimes committed on tribal lands even though many non-tribe members live and work in these areas. Additionally, tribal police on vast territories are generally underfunded and non-Indigenous federal agents are often insensitive and unwilling to prosecute perpetrators. The case numbers are also likely to be severely underestimated because of major failures to track these crimes, another consequence of the jurisdictional complexity.

For Indigenous women, obstructed justice also means an inability to receive necessary healthcare. Despite some Indigenous women’s access to healthcare through Indian Health Services (IHS), IHS is underfunded and understaffed and cannot alone provide comprehensive women’s sexual and reproductive health services. Rape kits, birth control, and emergency contraception are often unavailable. Plan B was only made available at IHS pharmacies in 2015, a long-delayed step that was ordered by a federal court. Further, the IHS is federally funded, so it falls under the Hyde Amendment, meaning that abortions are only available there under restrictive conditions, like in cases of rape. However, as Law Professor Sarah Deer, (Muscogee Creek) says: “We know that most rape victims don’t report [their rapes] at all.” (Professor Deer is also a member of Our Bodies Ourselves Today Leadership Council.) These failures of the IHS reflect the continued neglect, at the federal level, of issues critical to the survival and well-being of Indigenous women.

The stories of Indigenous women must be told. At Our Bodies Ourselves Today, we are documenting the first-hand accounts of women, girls, and gender-diverse people, which will be part of our world-class online platform with the most up-to-date, trustworthy, and inclusive information about our health, sexuality and well-being. If you are an Indigenous woman and would like to share your story, please reach out to us at https://bit.ly/3gK4Z6I.