Super Fun Health Graphic: Are you an employed single mother? Or maybe you own a small business? Either way, The New York Times explains how bills working their way through Congress might affect you: 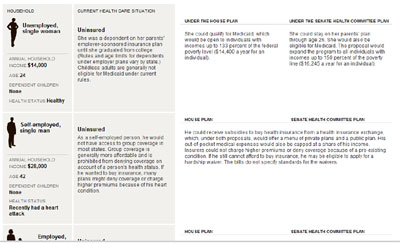 A Hot, Hot Summer: By a 31-28 vote, the House Committee on Energy and Commerce on Friday approved a health reform bill that would cover about 95 percent of Americans. It includes the so-called public option, a government insurance plan that would compete with private insurers. The bill allows the federal government to negotiate with drug companies for lower prices under Medicaid and limits how much insurers can increaes premiums. Subsidies would be provided to lower-income families to help cover the cost of insurance.

Two other committees — Ways & Means, and Education & Labor — approved legislation in mid-July. The full House will take up the bill, HR 3200, when it returns from August recess. Now everyone’s waiting on the Senate Finance Committee, chaired by Sen. Max Baucus (D-Mont.), to move its health reform bill out of committee — a move that isn’t likely to happen until after summer recess. Lawmakers and experts weigh in on what’s slowing everything down.

The Energy and Commerce committee vote was largely along party lines, with five Democrats joining all 23 Republicans opposed to the bill. In a story about how the White House might be ready to move forward without building broader bipartisan support, The New York Times notes that lobbying efforts are going to be “unusually heavy” this month. Indeed, House Republican leader, Rep. John Boehner of Ohio, has promised a “hot summer” for Democrats.

How much hotter than health reform = death can it get? Opposition to health reform already has become increasingly vocal, what with conservative talk radio fueling fear among senior citizens that healthcare reform will lead to end-of-life “rationing” and “euthanasia.” Ceci Connolly of the Washington Post writes:

Not since 2003, when Congress and President George W. Bush became involved in the case of Terri Schiavo, who lay in a vegetative state in a hospice in Florida, have lawmakers waded into the highly charged subject, said Howard Brody, director of an ethics institute at the University of Texas Medical Branch at Galveston.

The attacks on talk radio began when Betsy McCaughey, who helped defeat President Bill Clinton’s health-care overhaul 16 years ago, told former senator Fred D. Thompson (R-Tenn.) that mandatory counseling sessions with Medicare beneficiaries would “tell them how to end their life sooner” and would teach the elderly how to “decline nutrition . . . and cut your life short.”

House Minority Leader John A. Boehner (R-Ohio) and Republican Policy Committee Chairman Thaddeus McCotter (Mich.) said they object to the idea because it “may start us down a treacherous path toward government-encouraged euthanasia.”

Lawmaker, Protect Thyself: House Speaker Nancy Pelosi (D-Calif.), according to the NYT, “distributed cards outlining key points of the House’s health care approach” to all 256 Democrats heading to their home districts for August recess. She might want to send them home with their own personal armor.

Politico reports on growing incivility at town hall meetings led by Democratic representatives: “Screaming constituents, protesters dragged out by the cops, congressmen fearful for their safety — welcome to the new town-hall-style meeting, the once-staid forum that is rapidly turning into a house of horrors for members of Congress.”

Think Progress notes that “much of these protests are coordinated by public relations firms and lobbyists who have a stake in opposing President Obama’s reforms.”

The lobbyist-run groups Americans for Prosperity and FreedomWorks, which orchestrated the anti-Obama tea parties earlier this year, are now pursuing an aggressive strategy to create an image of mass public opposition to health care and clean energy reform. A leaked memo from Bob MacGuffie, a volunteer with the FreedomWorks website Tea Party Patriots, details how members should be infiltrating town halls and harassing Democratic members of Congress.

Visit Think Progress for the memo, which Lee Fang says “resembles the talking points being distributed by FreedomWorks for pushing an anti-health reform assault all summer.”

All this makes the 1994 version of Harry & Louise look like the nicest, most honest couple you’d ever meet (funny how life repeats itself, with a twist).

Center of Debate: Back to the legislation approved by the Energy & Commerce committee … By a vote of 30 to 28, the committee approved an amendment that states abortion would not be included in the “essential benefits package” to be defined by the government.

The amendment, proposed by Democratic Rep. Lois Capps, prohibits the federal government from compelling private providers participating in the federal healthcare exchange to cover abortion. But it also bars the government from prohibiting those plans from offering such coverage. And it requires that at least one of the private plans participating in the exchange cover abortion—and at least one of the plans to not. […]

Democratic defenders of the Capps amendment say it applies the Hyde Amendment, which for more than three decades has prohibited Medicaid from funding abortions except in very limited circumstances, to the new government-controlled healthcare. Private healthcare providers are free to cover abortion, but not with federal funds. The public plan would cover abortion, but not with federal funds; a Capitol Hill aide tells me money for abortions would come from what participants pay into the public plan.

Abortion has been the political football since the debate over healthcare commenced this year.

“One of the very real dangers in the debate on how to fix American healthcare is that women’s health will become a bargaining chip, with the GOP and anti-abortion forces trying to frame healthcare reform as an endrun to government ‘interference’ in our lives by ‘mandating’ abortion and gasp, contraception,” writes Lucinda Marshall.

And over at RH Reality Check, Amanda Marcotte looks at how the media has been reinforcing unexamined arguments against public funding for abortion, and she explains the true story:

Here’s the unvarnished truth: There is no way that any kind of public health care plan will have elective abortion coverage. Nor is there any real chance of abortion becoming mandated coverage. It’s more likely that breast implants will be paid for by tax money. It’s more likely that a public insurance option will provide everyone wth an iPod Touch. Believe me; even most pro-choicers gave up a long time ago on hoping that we could overturn the Hyde Amendment that bans women who are on federally funded insurance programs from getting elective abortions covered, and there’s no way that this will change if the number of women on federally funded health insurance grows. And even though it would only be fair and cost-effective to mandate coverage for elective abortion, in this country that’s sadly a pipe dream.

Plus: Princeton economics professor Uwe E. Reinhardt offers a glimpse of what a health reform bill would look like if it conformed with the American public’s idea of “common sense” in health care. And Bill Moyers on Friday re-aired a must-see interview with former insurance industry executive Wendell Potter. Watch it or read the transcript. You may come away mad, but you won’t be disappointed.

Want to Cut Costs? Over Here, Mr. President: Also at RH Reality Check, Jennifer Block, author of “Pushed: The Painful Truth About Childbirth and Modern Maternity Care,” writes about where healthcare cost savings can be found:

A new economic analysis forecasts savings of $9.1 billion per year if 10 percent of women planned to deliver out of hospital with midwives. (Right now, just one percent do). If America is serious about reform, midwifery advocates are saying, “Hey, how about us?”

Childbirth, in fact, costs the United States more in hospital charges than any other health condition — $86 billion in 2006, almost half paid for by taxpayers. This high price tag — twice as high as what most European countries spend — buys us one of the most medicalized maternity care systems in the industrialized world. Yet we have among the worst outcomes: high rates of preterm birth, infant mortality, and maternal mortality, with huge disparities by race.

Tell Me: What’s Wrong With Single-Payer Again?: David Brooks and Gail Collins try to figure it out. Collins starts with this set-up:

Since something like a third of the cost of health care is in administration, and the problem with reorganizing health care has to do with all the multitudinous plans and policies, a single-payer system would be far and away the most cost effective answer. We don’t talk much about it because it isn’t politically possible. But it isn’t politically possible because we don’t talk about it. The opponents of a public plan are afraid that people would all gradually migrate toward it, causing the insurance industry as we know it to wither away. Wouldn’t that be a good thing?

In Other News, Senate Committee Grasps Reality: It seems that funding for abstinence-only sex education is losing its luster. The Senate Appropriations Committee on Thursday approved its fiscal year 2010 spending bill (HR 3293) for health, education and labor programs, minus funding for the controversial program. The $730 billion bill, approved by a vote of 29-1, includes $104.5 million for a comprehensive “Teen Pregnancy Prevention” program and no funding for abstinence-only sex ed. Abstinence-only advocate Sen. Sam Brownback (R-Kan.) cast the only “no” vote.

“After more than a decade, Congress has finally begun to put teenagers’ health above politics and ideology,” Michael Macleod-Ball, acting Director of the ACLU Washington Legislative Office, said in a statement. “The Committee’s actions represent a looming victory for young people, parents and advocates of science-based approaches.”

The same statement notes that the measure must still go to the full Senate for a vote, “where misguided efforts to reinsert funding for abstinence-only programs are possible.”