Yes, OBOS has finally joined Twitter. Or, more precisely, Judy Norsigian, OBOS co-founder and executive director, has joined Twitter. You can find her at http://twitter.com/judyobos.

What does that mean for you? Well, if you’re already on Twitter, follow Judy for news updates as well as her take on health studies, media, live reports from conferences and events — anything on women’s health that she feels is worth sharing. 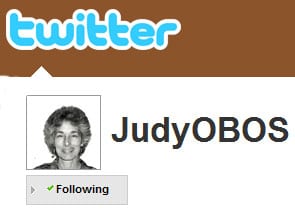 If you’re not on Twitter, you might want to give it a try. What exactly is it? According to Wikipedia, Twitter is defined as “a social networking and micro-blogging service that allows its users to send and read other users’ updates (otherwise known as tweets), which are text-based posts of up to 140 characters in length.”

You can Twitter from your computer, your cell phone, or IM. Here’s a useful FAQ that explains how it works, and five ways to use Twitter for good. I also like this post, which invites readers to complete the statement “Twitter makes me more ___.”

Let us know if you have any questions or comments.

Plus: If you’re worried about Twitter overload, Deanna Zandt this week wrote about how to deal with the many conversations taking place. Any other tips users want to share?