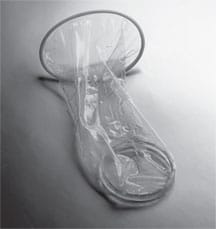 A female condom — also known as an internal condom — is a pouch that is inserted into the vagina before intercourse to prevent pregnancy and reduce the risk of sexually transmitted infections. In the United States today there is only one brand of female condom, the FC2.

The FC2 is a thin sheath with a soft ring at each end. One ring, covered with polyurethane, fits over the cervix and rests behind the pubic bone, acting as an anchor. The larger, open outer ring covers part of the perineum and labia.

Find out more about the FC2 condom.

In the United States, the FC2 is available both over the counter and by prescription. Most insurance companies will cover the cost.

Because it is not made of latex, it will not deteriorate when used with oil-based lubricants. It can be inserted before intercourse but should be removed immediately after. The FC2 is pre-lubricated with a silicone-based lubricant and does not contain spermicide. It does not require precise placement over the cervix. Male and female condoms should not be used at the same time, because the added friction between the two condoms could cause them to break. Like the male condom, the FC2 female condom is intended for onetime use.

For more information on access to female condoms around the world, see “Promoting Global Access to Female Condoms.”
Although the research on female condoms is not as extensive as that on male condoms, consistent and correct use of the female condom appears to provide a level of protection against STIs, including HIV, similar to that of the male condom.

Tip: Practice inserting a female condom before you use one during sex.

Where to Get the FC2 Female Condom

Your health care provider can write a prescription for the FC2. Most health insurances in the United States will cover the cost, so you won’t have any out-of-pocket expenses. You can also find FC2 at Planned Parenthood and other family-planning clinics and can buy them online at the FC2 website. A pack of twelve condoms costs about $30.