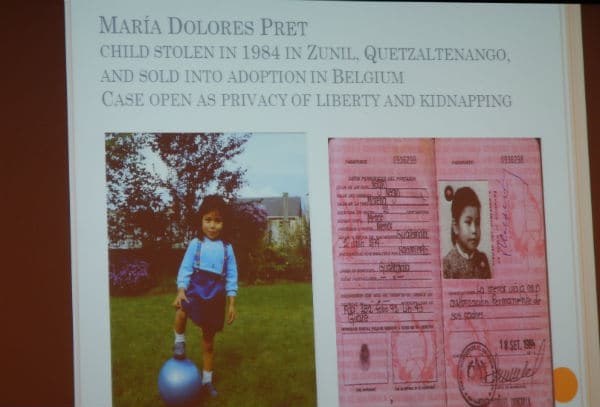 Marcy Darnovsky of the Center for Genetics and Society and OBOS’s Sally Whelan recently attended a conference on international adoption and surrogacy in the Netherlands. This post has been reprinted with permission from CGS.

In August, the International Forum on Intercountry Adoption and Global Surrogacy took place in the wake of headlines about two disturbing surrogacy incidents in Thailand.

In one case, an Australian couple was accused of abandoning their baby son, who has Down syndrome, with his Thai surrogate mother and returning home with his twin sister; the husband was then revealed to have been convicted of multiple child sex offenses that took place between the early 1980s and early 1990s against girls as young as 5.

In the other news story, a young Japanese businessman fathered 16 children since June 2013 with Thai surrogate mothers, claiming that he wanted a large family.

These incidents took surrogacy out of its usual celebrity-driven spotlight and highlighted the risks of unregulated international surrogacy arrangements for a broader public. For Forum participants — including a hundred scholars, women’s health and human rights advocates, and policymakers from 27 countries — they also underlined concerns about children born as a result of contract pregnancies, and set the stage for discussions of the “best interests of the child,” which is a foundational concept of the 1993 Hague Convention on Intercountry Adoption (HCIA).

The Forum was held at the International Institute of Social Studies of Erasmus University, the host organization in The Hague. It aimed to provide a venue, as this press release notes, “to discuss ways to improve international standards around the evolving practices of cross-border adoption and surrogacy, in which children typically move from poorer to wealthier countries.”

The Center for Genetics and Society chaired the Global Surrogacy Practices section of the conference. Sally Whelan, program director of OBOS’s Global Initiative, assisted CGS with planning and implementing the surrogacy track and facilitated its opening session, “Overview of concerns about cross-border surrogacy: what do we know; what do we need to know; what do we call it?”

By design, the Forum took place in advance of the Hague Conference on Private International Law’s upcoming considerations of its work on intercountry adoption and surrogacy. Implementation of the HCIA, and ongoing concerns about patterns of fraud and “failed” adoption, will be discussed by its Special Commission in Spring 2015. 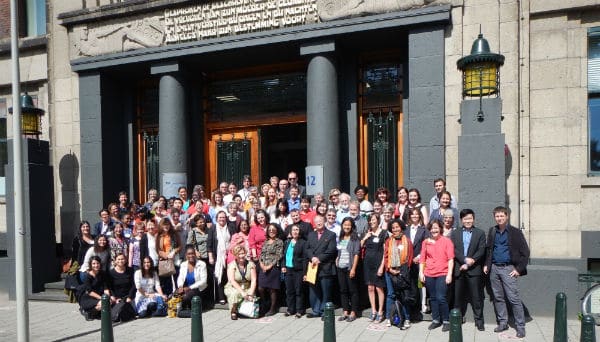 In roughly the same time frame, the Hague Conference staff (known as its “Permanent Bureau”) expects to receive guidance from its member countries about whether and how to move ahead toward a possible convention on international surrogacy. Permanent Bureau members participated in the Forum, and indicated their active interest in the discussions and evidence presented there.

Forum participants who have focused on surrogacy and those who have worked on intercountry adoption learned a great deal from each other over the course of the three-day event. Adoption experts presented data regarding the past and present challenges of international adoption faced in countries such as Ethiopia and Guatemala, while surrogacy experts shared findings from India, Mexico, Israel and elsewhere.

Several anthropologists and advocates presented accounts of their fieldwork with surrogate mothers in India, a major destination for international surrogacy, and the country in which it has been most intensively studied.

Meeting jointly and in smaller groups, participants identified and discussed several similarities between intercountry adoption and surrogacy, and explored how lessons learned from decades of work by the international adoption community might inform surrogacy practices.

One issue that is now more or less settled in the adoption context is that adopted children are entitled to “legal openness” about their biological origins; this raises the question of whether children born in surrogacy arrangements should also be granted access to information about their genetic and gestational origins. Adoptees repeatedly stressed the preservation of records as a primary concern for surrogacy practice.

Another question turns on the similarities between the situations of birth mothers of adoptees and surrogate mothers, and on how their health, interests and rights can be protected. A third concerns the role of intermediaries in the two practices, and whether, and under what conditions, agencies are part of the solution or part of the problem.

Differences between intercountry adoption and international surrogacy are also instructive, and were the focus of many discussions at the Forum. In the case of adoption, the assumed starting point is a child in need of a home; with surrogacy, it’s adults who wish to create a child in order to become parents.

Also, most countries see intercountry adoption as a practice that at least in some circumstances should be supported; in contrast, most countries currently prohibit commercial surrogacy altogether and face the quandary of what to do when their citizens flout these laws and go abroad to the handful of jurisdictions that allow it.

Participants whose work has focused on issues of parentage and citizenship of children born in international surrogacy arrangements, and those focused on the conditions of women working as surrogates, were able to easily agree that any international convention — as well as other policy or advocacy efforts — should protect the rights and well-being of all parties: children, women working as surrogate mothers, and intended parents.

There was also agreement that any international convention should be structured so that it does not pressure jurisdictions that prohibit commercial surrogacy to loosen their laws.

In its 2012 “Preliminary Report on the Issues Arising from International Surrogacy Arrangements” (pdf), the Hague Conference Permanent Bureau focused primarily on the “best interests of the child” in intercountry surrogacy arrangements, especially these children’s citizenship and parentage status. But the report also covers concerns about psychological and health issues they may face, and includes strong language about the urgency of addressing the documented patterns of abuse and human rights violations against surrogate mothers.

While Forum participants shared strong concerns about the problems that intercountry surrogacy arrangements raise, and about minimum standards for any projected international convention, many were fundamentally unsettled about commercial surrogacy itself and about the best policy option for addressing it.

Some consider commercial surrogacy unacceptable, on the grounds that it commodifies and commercializes both babies and women’s reproductive capacities. From this view, commercial surrogacy should be prohibited because it exploits women, especially those who have few other economic options, and constitutes a form of baby selling.

Others believe that harms to surrogate mothers can be addressed by defining contract pregnancy as a form of work, and establishing regulation and oversight to improve labor conditions. Their views are based either on a pragmatic sense that international surrogacy is already an established fact and that policies to protect those involved are urgently needed, or on the belief that surrogacy can benefit women who have few other options for earning the kind of money this work can bring them.

Some participants reported that they changed their mind on these questions, in one direction or another, during the Forum and most agreed that the animated and thoughtful exchanges had opened their minds to aspects of the issues they had not previously considered or taken seriously.

The Forum’s discussions and deliberations made clear that the issues raised by international commercial surrogacy are complex and that opinions about it are varied, even among women’s health advocates and feminist scholars. The wide range of concerns expressed, and the evidence on which they are based, will help inform the Hague Conference as it continues to consider the feasibility of a convention on international surrogacy.

Recordings of the Forum’s three plenary sessions will soon be posted on its public website, and a report on the discussions and deliberations will be published later this fall.

Marcy Darnovsky is executive director of the Center for Genetics and Society, a Berkeley, Calif.-based public affairs organization working to encourage responsible uses and effective societal governance of reproductive and genetic technologies.

Period Poverty is a Human Rights Issue. Period. by Guest Contributor August 6, 2021 by Hannah Sachs-Wetstone What is period poverty? Let’s talk about period poverty. Period poverty occurs when menstruators cannot access the menstrual products, underwear, and pain medication they need to maintain their menstrual health due to a variety of factors, such…
Stopping Keystone: A Victory for Native Women’s Health by Guest Contributor July 1, 2021 By Hannah Sachs-Wetstone In early June, after more than ten years of conflict, the Keystone XL oil pipeline project was halted by TC Energy, the company behind the project. This is a victory for Indigenous communities and environmental activists. However,…
Spreading the Word about Medication Abortion Via the Mail: An Urgent Priority for 2022 by OBOS May 5, 2022 By Aziza Ahmed and Timothy RB Johnson Our Bodies Ourselves is a long-time supporter of greater access to medication abortion via the mail and outside the formal medical system. This includes greater use of “self-managed abortion with pills” (defined as…