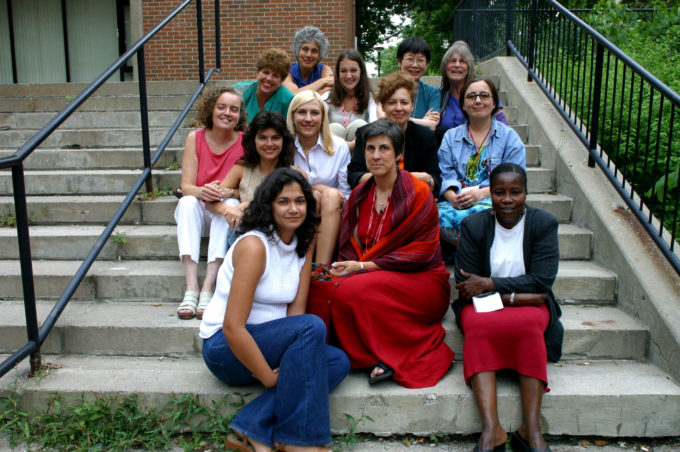 Members of the OBOS Global Network at the 9th International Women and Health Meeting, Toronto, August 2002.

In 2018, due to financial constraints, Our Bodies Ourselves transitioned to a volunteer-led nonprofit. As a result, the OBOS Global Initiative has ceased to exist as an independent program and OBOS’s global activities have been significantly reduced. However, Our Bodies Ourselves is still sometimes able to provide guidance and support to global groups or individuals who wish to adapt “Our Bodies, Ourselves.”

To find out more about the work of OBOGI and the kind of support OBOS can provide today, click on a question below:

WHAT was THE GOAL OF THE OBOS GLOBAL INITIATIVE UP TO 2018?

The OBOS Global Initiative (OBOGI) delivered evidence-based, culturally appropriate information on health, sexuality and reproduction to girls and women all over the world, via partnerships with women’s organizations that requested permission and technical assistance to adapt “Our Bodies, Ourselves” for their community or country.

At optimal functioning, OBOGI offered a range of technical assistance as partners planned, developed and distributed their adapted materials and used them for outreach and advocacy. OBOGI was sometimes able to identify grant funding and secure sub-grants for select partners.

What kind of support for global projects does OBOS offer today?

As a result of its transition to a volunteer-led organization, Our Bodies Ourselves is no longer able to fund and staff the Our Bodies Ourselves Global Initiative. Moving forward, OBOS will attempt to continue offering some level of technical assistance to existing and new partners. However, OBOS will be limiting the amount of content that new partners can use as well as the number of partners it can support.

If you are interested in partnering with OBOS or finding out more about the scope of OBOS’s current global activities, FAQs for potential partners.

What is the history of OBOGI?

When “Our Bodies, Ourselves” became a bestseller in the United States in the 1970s, publishers and women’s organizations in Europe sought to use it as a resource for their countries, resulting in eight different translations across Europe. Projects later followed in Russia, Egypt, South Africa, China, Japan and Israel, many of which moved away from commercially produced direct translations to resources that were adapted by women who lived in the cultures where the materials were created.

Norma Swenson, one of OBOS’s founders, led the global outreach, working on early editions in Europe. She explored new opportunities in Latin America, Asia and Africa and championed a program dedicated to the organization’s growing network and vision. With a foundation in place and projects underway in Thailand, China and Senegal, transitional leadership was provided by Jennifer Yanco. In 2000, Sally Whelan, another OBOS founder, led the global work under a dedicated program called the Global Translation/Adaptation Program. Sally was joined by Ayesha Chatterjee in 2006 and, together, they shaped a program that facilitated a thriving global network. The program was re-named the Our Bodies Ourselves Global Initiative in 2010, and Sally and Ayesha remained on staff until OBOS’s transition to a volunteer model in 2018.

Over the years, the global partners have held three in-person gatherings to share their experiences adapting the book for women in their own countries and learn from each other. The meetings took place in 2001, 2002, and 2011. Read more about these gatherings.

WHO HAS OBOGI PARTNERED WITH?

The profile of each partner has been distinctive, ranging from grassroots groups to academic institutions, from coalitions based within international agencies to networks formed solely to develop an adaptation of “Our Bodies, Ourselves.”

In general, partners have had an intimate understanding of local and regional needs, as well as the social, political and religious forces that affect the communities in which they live and serve.

Watch OBOS’s global partners talk about their work at OBOS’s 40th anniversary symposium.
They have also had local buy-in, with grassroots and institutional allies that trust and support their work on behalf of women and girls. Global partners have been uniquely positioned to both develop adaptations of “Our Bodies, Ourselves” that speak to the needs of their community and use the developed materials in outreach and advocacy efforts.

Many of the adaptations were published as books. More recently, partners have produced resources in shorter print formats such as booklets, handouts and posters, and in non-print medium including websites, community workshops, campaigns, and trainings. This has helped ensure that the resources, which are often shared both on and offline, are completed quickly and remain current, effective tools for community-based action. You can view a map that locates all of our global partners. Click on the name of a country to learn more about each adaptation.

WHAT ARE SOME WAYS “OUR BODIES, OURSELVES” ADAPTATIONS HAVE REACHED THEIR AUDIENCE?

Through their publications and outreach, OBOS’s partners have reached millions of people with information on reproductive health, sexuality, and human rights, and given people the skills to translate this information into action. Global partners have also engaged power brokers — from men and family matriarchs, to religious leaders and government policymakers — to improve health services and health outcomes for women and girls.

Here are some examples of partners in action:

Serbia: Women’s Health Promotion Center designed an intervention model for health providers across the nation to screen and respond to the needs of domestic violence survivors.

Israel: Women and Their Bodies built bridges between Arab and Jewish women who collaborated on Arabic and Hebrew adaptations of “Our Bodies, Ourselves.”

Turkey: Mavi Kalem reached more than 12,000 young women via campaigns that use a statement of women’s rights principles and a badge with the slogan “My Body is Mine.”

Each partner is an independent entity and, as such, is operationally unaffected by OBOS’s transition to a volunteer model. They continue to implement their own programs, in their own communities, based on their own vision and goals.

The OBOS Global Initiative worked with grassroots and institutional women’s organizations that have identified “Our Bodies, Ourselves” as a key resource for improving health outcomes and have requested permission to translate and culturally adapt it for their own communities or countries.

OBOS has never solicited or commissioned a project. Instead, organizations interested in using OBOS content reached out to OBOGI and started projects only after completing a comprehensive application process designed to help OBOS understand their goals and capacity.

The application process has generally involved extensive conversation with potential partners, and only upon receiving approval from OBOS have they worked on transforming “Our Bodies, Ourselves” into a meaningful tool for local education and action.

Interested in developing a resource for your country? See FAQs for potential partners.

When the program was active, OBOGI helped new partners identify the best format for their community. In recent years, OBOGI has generally discouraged the development of full-length print books. This is because books take time and can be costly and cumbersome to produce and distribute – a deterrent not just for partners coordinating projects, but for funders as well. Print books are also less appealing to certain audiences; in some areas, young women may prefer information in a digital format; in others, the majority of girls and women may have very basic literacy or be unable to read altogether.

WHY HAVE WOMEN’S GROUPS AROUND THE WORLD USED “OUR BODIES, OURSELVES” AS THE BASIS FOR DEVELOPING HEALTH RESOURCES?

Each partner would offer a different response to this question. The individual project pages include some of the key issues affecting women’s health and well-being in countries where projects have been completed or are underway. You can also read the prefaces from various global projects (translated back to English) — these often provide more specific information about what sparked a group’s interest in adapting “Our Bodies, Ourselves.”

Generally speaking, a worldwide gap in evidence-based, culturally appropriate and non-judgmental information on health, sexuality and reproduction has been a primary driver. OBOS’s signature publication, “Our Bodies, Ourselves,” has addressed this critical gap by:

Partners have reported that these factors make the book accessible to many and different cultures.

Shamita Das Dasgupta, representing the 2008 Sanlaap and Manavi collaboration in India, says it best: “‘Our Bodies, Ourselves’ is the preeminent and most comprehensive book on women’s sexuality and health. It lends itself to other languages and cultures. It really has no rival in this field.”

WHAT KIND OF SUPPORT HAVE GLOBAL NETWORK PARTNERS RECEIVED FROM OBOGI?

Since OBOGI was created in 2001, and up until OBOS’s transition to a volunteer-led non-profit in 2018, the program leveraged four decades of experience in women’s health publishing and advocacy to provide partners with support as they developed materials based on “Our Bodies, Ourselves,” strategized distribution and outreach, and (when possible) organized for social and political change.

WHAT ARE SOME OF THE CHALLENGES GLOBAL NETWORK PARTNERS HAVE FACED?

Some challenges have been common; others have been specific to particular countries/regions. For example, almost all partners have struggled with raising money. Others have confronted challenges such as censorship, pro-natalist government policies, community backlash, armed conflict, and civil and political unrest.

Over the years, while the program was active, OBOGI worked closely with partners to identify effective solutions to project barriers and to facilitate a network-wide exchange of ideas, skills and resources. This partnership model, which combined OBOS’s collective energies and strengths, is a powerful recipe for success — one that helped OBOS grow from a small Boston-based organization to one that is part of a dynamic international network of social change activists.

Why are these global partnerships relevant to human rights activism?

Each partner represents a link in a long global chain of human rights activism and, with roots in the community, serves as a key ally to governments and large humanitarian agencies. In this role, partners that have used “Our Bodies, Ourselves” content – and others like them – are central to countering failed political leadership and cultural mores that restrict mobility, access to resources, and decision-making power on matters related to sexual health, marriage, fertility and birth control, education and money. Without them, and the bridge they create between communities and institutions, advancing health and human rights remains a challenge, despite significant aid and various international human rights covenants and watchdogs that purport to protect women and girls.

HOW CAN I SUPPORT OBOS AND ITS GLOBAL PARTNERSHIPS?

If you would like to support or become involved in an existing project, please contact the relevant partner directly. Contact information is provided at the bottom of each project page.

If you are interested in using content from “Our Bodies, Ourselves” to develop a resource for your country, please carefully review the FAQs for potential partners and then contact OBOS.

If you would like to make a financial contribution to OBOS, you can do so here.

HOW MANY RESOURCES BASED ON “OUR BODIES, OURSELVES” HAVE BEEN DEVELOPED?

As of September 2021, resources based on “Our Bodies, Ourselves” have been developed in 34 different languages. The most recent project, Nossos Corpos por Nós Mesmas, a Portuguese Brazilian adaptation, was published in 2021. Additional projects are underway: The Roshan Institute for Persian Studies and the Department of Women’s Studies at the University of Maryland are developing online content in Farsi and women from the Assiouar Association in Morocco are creating resources on sexual anatomy and body image in Arabic and French.

ARE ANY RESOURCES AVAILABLE ONLINE?

HOW DO I OBTAIN PRINT COPIES OF RESOURCES BASED ON “OUR BODIES, OURSELVES”?

Many of the print adaptations are available online, to read and download. Please check the individual project page for the resource in which you are interested. If a resource is not available online, please contact the partner directly for information on how to obtain print copies — contact information is provided on their project page. OBOS does not have the capacity to sell or distribute publications developed by its partners.