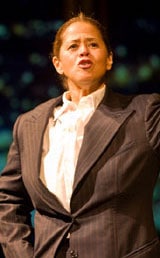 It’s been years since I’ve seen playwright and actress Anna Deavere Smith perform live (her recurring role on “West Wing” was also incredibly satisfying), and I was glad to come across a story about her play “Let Me Down Easy,” which recently concluded a one-month run at the American Repertory Theatre in Cambridge, Mass.

The fact that the story appeared in the health section of The New York Times might come as a surprise, but it makes perfect sense considering that a portion of the play is about health care and the relationships between doctors and patients.

In all of her works, Smith exposes the nuanced lives of the characters she assumes. The stories are based on extensive interviews, and the results are honest, compelling and complex. Such intimacy invites intense discussion and engagement, long after the final curtain. Describing some of Smith’s roles in “Let Me Down Easy,” Pauline W. Chen, M.D., writes:

Ms. Smith plays a young doctor who stayed behind at Charity Hospital in New Orleans during Katrina, in awe of the dignity of her African-American patients but angry that their predictions of being rescued last would indeed come true.

Later she’s a patient who at first seems cantankerous in refusing dialysis, only to reveal she remains haunted by memories of the undignified way in which her daughter, suffering from AIDS, was discharged from the hospital, wrapped in her own blood-soaked sheets.

Then she transforms into a physician who laments a U.S. health care system that cannot offer even basic preventive care, and who as a medical school dean somehow feels responsible.

I recently asked Ms. Smith about listening, about what all of us, as patients and doctors, might learn from her experiences interviewing and listening over the last 30 years. […]

Sitting in the audience that night, I had thought I was listening. But I wasn’t getting out of the way of what I was hearing. I couldn’t help but hear my own internal voice, sifting the stories Ms. Smith told: Do I agree with what that character is saying? Do I know this character? What’s up with that character’s hands?

But then Ms. Smith became Ingrid Inema, a Stanford pre-med student from Rwanda. The character, a young woman, looked lost on stage, sitting next to a great pile of books, her face partly obscured by a baseball cap. But her voice was clear. She talked about living through the genocide in her country, about not being able to forgive because the perpetrators have never come to ask for forgiveness. And about how she decided to let go.

“I release you,” I can still hear Ingrid saying, her voice resonating out from the darkness of the stage. “I am not holding you in my heart anymore.”

Chen goes on to discuss audience responses to the question posed in the theater lobby: What does grace mean to you? She offers examples from her medical profession of moments of grace between doctors and patients; readers can do the same at this related blog post. You can also listen to Chen’s conversation with Smith about listening.

Smith’s next work looks to be equally compelling. It’s called “The Arizona Project,” and it debuts Nov. 5 in Phoenix. Here’s a summary:

The Arizona Project presents the stories of Justice O’Connor, as well as those of more than 30 women with relationships to the American judicial system, including prison system employees,incarcerated women, female lawyers, activists and others. The Arizona Project touches upon several contemporary issues through these diverse personal stories, including immigration, domestic violence, and the challenges faced by women living on Native American reservations.