There are few female athletes whose pregnancy would be analyzed every which way in the public eye. Basketball phenom Candace Parker, 22, who drew national attention for winning a slam dunk contest when she was only 17, and later led the Tennessee Lady Vols to two straight NCAA championship titles and was the first pick in the 2008 WNBA draft, is one of those athletes.

Parker’s pregnancy — and what it means to her team, the Los Angeles Sparks, and to the WNBA, was the focus of a recent New York Times story. The story ran in the sports section, not Style, which more often than not is the keeper of stories on work/life balance.

“My whole career has been trying to please people in basketball,” said Parker, who is married to Sacramento Kings forward Shelden William. “Now it’s time to please myself.” She added, “For me, family has always come first.”

Parker is due in the spring and says she will play in the 2009 season, which starts in June. This has not kept fans from calling her “selfish” on internet message boards or questioning her commitment to her team. As the NYT’s Karen Crouse writes, no player has been counted on more than Parker, the face of the WNBA’s marketing campaign, to promote the women’s league.

Now it appears the league has figured out another way to make the most of the situation:

W.N.B.A. Commissioner Donna Orender said her initial reaction to Parker’s pregnancy was a quiet sigh of resignation. Then she thought of all the women in the more traditional workplace struggling with the issue of when or if to start a family, and she realized that Parker’s pregnancy provided a perfect modeling moment.

“Here she is, front and center, and people are discussing the timing of her reproductive life,” Orender said Friday in a telephone interview. “That’s a very public discussion that hasn’t happened before. I do think that’s a good thing for women who go through these issues often in silence or alone.”

She added, “Candace can be a very usable symbol of how you can have a family and a career.”

A few days after the NYT story ran, WNBA.com published this Q&A with Parker, described as a conversation about “her pregnancy, the balancing act of being a professional athlete and a mother, her road back to the basketball court once the baby is born and having a child in the Obama era of America.” (Who wouldn’t love to see Parker and the president go one-on-one at the White House court?)

Parker told the Times the only person in the basketball world whose opinion matters is her college coach, Pat Summitt, and she gave Parker her support. In an interview with Time magazine published today, Summitt repeated that she is excited for her former player.

“I don’t think she’ll have a problem working herself back into great shape, and playing in the league. And to criticize that — it’s her personal choice.”

(Summitt is making her own headlines this week. The longtime Lady Vols coach is one game away from achieving an amazing milestone: 1,000 wins. That victory could come tonight, as the Vols take on Oklahoma.)

Meanwhile, Women’s Hoops blogger Jayda Evans wonders what all the fuss is about.

Current Storm G Sheryl Swoopes, 37, was the first player signed by the league and one of three faces in the first marketing scheme when she became pregnant at age 26. She was back six-weeks after delivering Jordan in June 1997, creating a media frenzy in Houston. Swoopes went on to help the now defunct Comets win the first of their four championships.

Because Parker […] is a healthy 22-year-old, I’m guessing she won’t have any complications. Again, so many women have done this in a variety of sports that the new theme should be how they can bring their children to work.

Plus: The divided public opinions on Parker’s pregnancy seem to have tied up the NYT as well. The headline on the story reads, “Candace Parker Is Balancing Career and Family.”

Now look closely at the page title, which appears in the top bar of the browser. It reads, “Candace Parker Is Putting Family First.”

I took a screenshot (click image to enlarge) to record the difference. 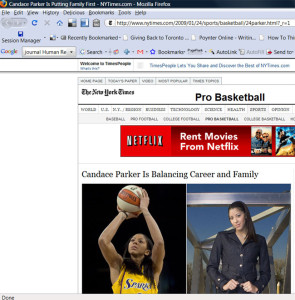