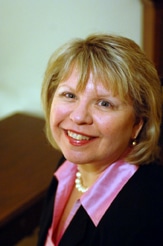 I am nominating Lisa Martinez RN/JD for her commitment to helping women become their own best advocate for their sexual health and her dedication to providing educational resources and a forum for healthcare professionals and women through The Women’s Sexual Health Foundation (TWSHF).

The Women’s Sexual Health Foundation’s primary mission is to educate the public and healthcare providers on how medical conditions can impact their sexual health. Lisa’s path to her establishing the foundation is a deeply personal one. Her own sexual health issues following surgery sent her seeking answers from the medical community.

“I hit a lot of brick walls,” she said. “My doctors tried to help but they admitted they were not very knowledgeable, so I went to the East coast for care.” There she not only found the proper care, but she was also validated for the first time. She realized that her problem was physiological – not “just in my head.”

While still a patient at Boston University, she was invited to speak at a conference on “How Hysterectomy Affects Sexual Function.” The response to her presentation was extremely positive.  She had clearly identified a need, and was encouraged to start an organization for women. She came home from Boston and within one week in March 2003, she decided on a name and a mission statement and launched a website, www.TWSHF.org.

An international advisory board of thought leaders in the field of women’s sexual health was selected, and in October 2003, Lisa was invited to Amsterdam to attend the International Society for the Study of Women’s Sexual Health. She took TWSHF education brochures, which received tremendous attention from the doctors, researchers, and other healthcare providers at the conference.

“It was obvious to me after Amsterdam that a foundation was needed to support a multidisciplinary approach for the treatment of women’s sexual health issues and serve as an educational resource for both the lay public and healthcare professionals.”

As Lisa’s health problems resolved, she realized not all women have access to the care she received. She couldn’t stop thinking about those women who don’t know how to navigate the health system until they find the right care; those who were suffering in silence and the universal challenge of all women – how to talk about sexual health problems with your doctor.

Remember 20 years ago when we didn’t talk about breast cancer? In fact, we didn’t even say the word breast!

“For whatever reason, women and healthcare providers have not historically held appropriate, healthy discussions concerning sexual health, which is part of who we are as human beings,” Lisa says.  “Having a fulfilling sex life is part of having a full life.” She adds:

One reason may be because doctors receive little if any training in this area. Plus, if the doctor does not open the door to the discussion on sexual health issues, research shows women generally will not bring up the topic.  This creates a gap in information and treatment for women.  In addition, there are medical conditions and medications that impact a woman’s sexual function, such as cancer, diabetes, MS, hysterectomy, chemotherapy and antidepressants; however, doctors may not explore this with their patients.

In October 2008, Lisa co-authored the Foundation’s quarterly journal on “Cancer and Sexuality,” and made it available as a free download on www.twshf.org. This was a deeply personal project for her, because the year before she was diagnosed with breast cancer. Her surgery, treatment and recovery have deepened her understanding and her commitment to the mission of TWSHF.

A Columbus, Ohio native, Lisa received her nursing diploma from Grant Hospital School of Nursing and attended Otterbein College in Westerville, Ohio. She then received a business degree in nursing management from the College of Mt. St. Joseph, and in 1991 she earned her law degree from the University of Cincinnati.  Currently, her “day job” is Director of Legal Services for a major healthcare system in SW Ohio.  She is the volunteer Executive Director of TWSHF and donates all speaking honorariums and fees back to the foundation, and works tirelessly to support the organization by writing grants and other fundraising efforts.

Women are asking questions. Does sexuality in older women exist? Does my physician take me seriously? Why did a routine hysterectomy cause such dramatic changes in my body? If I had only known the risks, would I have felt so alone with my symptoms?In an effort to get these conversations underway, TWSHF has partnered with the Columbia University College of Physicians & Surgeons to present annual symposiums for healthcare professionals and the public on “Reclaiming Healthy Intimacy, Passion and Pleasure.” This year the TWSHF blog, written by Lisa, was  named the “100 Best Health Care Policy Blogs” by www.RNCentral.com and the Top Health Blogger by Wellsphere.

“Every woman needs to be her own advocate,” urges Martinez. “She can increase her chances of being the best advocate possible by becoming a knowledgeable consumer of healthcare. As a nurse and as a cancer survivor, I know it is devastating to feel alone. No woman should ever feel alone.” Lisa Martinez puts her heart and soul into The Women’s Sexual Health Foundation in order to provide that much-needed support for women around the world.