President Obama on Monday said he was “confident” the Supreme Court will uphold the Affordable Care Act, adding that overturning it would be an “unprecedented, extraordinary step.”

And, as of 2014, adults would also be protected. Women could no longer be denied coverage based on pre-existing conditions such as pregnancy or domestic violence. The law would also eliminate gender rating, in which women end up paying more than men for insurance coverage.

And there’s more, via Raising Women’s Voices: A top 10 list of benefits for women under health care reform; specifics on how the law is already helping young women; and more details on how it supports women of color.

Back to Obama’s remarks:

So, that’s just the part that’s already been implemented. That doesn’t speak to the 30 million people who stand to gain coverage once it’s fully implemented in 2014.

And I think it’s important, I think the American people understand and I think the justices should understand that in the absence of an individual mandate, you cannot have a mechanism to ensure that people with preexisting conditions can actually get healthcare. 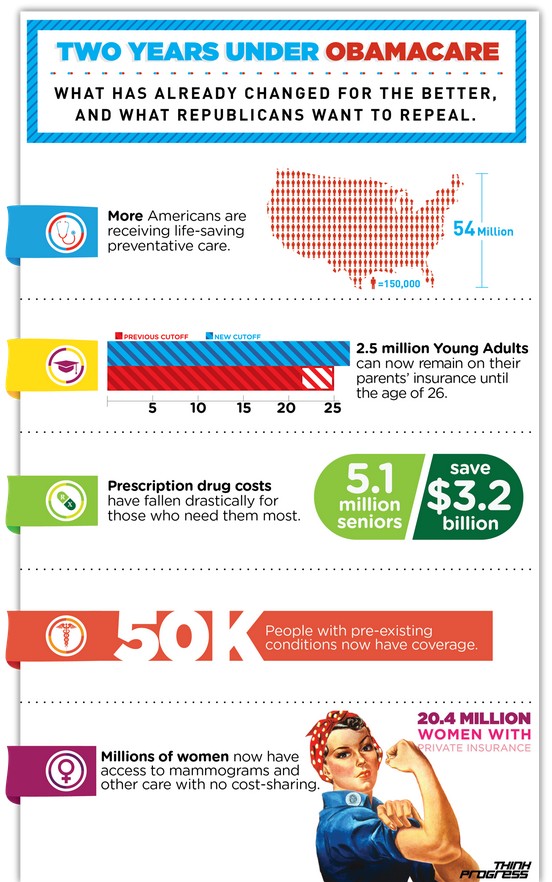 We have to wait until sometime in June to find out if Obama is right, but there’s been no shortage of guess work underway to determine 1.) whether the Supreme Court will uphold the individual mandate requiring almost every American to buy health insurance; and 2.) what will become if health care reform if it does not.

Writing in The New Yorker, Jeffrey Toobin notes that the “heavy burden” of justification for the mandate — which Justice Anthony M. Kennedy asked Donald Verrilli, the solicitor general, to address — should instead be placed on the law’s challengers.

“The involvement of the federal government in the health-care market is not unprecedented; it dates back nearly fifty years, to the passage of Medicare and Medicaid,” writes Toobin. “The forty million uninsured Americans whose chances for coverage are riding on the outcome of the case are already entered ‘into commerce,’ because others are likely to pay their health-care costs.”

“Acts of Congress, like the health-care law, are presumed to be constitutional,” he later adds, “and it is—or should be—a grave and unusual step for unelected, unaccountable, life-tenured judges to overrule the work of the democratically elected branches of government.” Toobin then demonstrates how the justices’ questions reflected a troublesome meddling in policies set by Congress.

The Individual Mandate – A Not-So-Brief History

The individual mandate, as explained in this NPR story, has Republican roots dating back to 1989. Rachel Maddow discussed the party-line history during a recent segment, summed up as: “When Republicans proposed it — great idea, a conservative solution. When a Democrat has the idea, it’s socialism, tyranny and unconstitutional.”

Though Republicans circa 2012 would like Americans to believe the individual mandate is indeed “unprecedented,” Linda Greenhouse, who covered the Supreme Court for The New York Times for 30 years and who now writes a column on legal issues, applies the description to the politics of this debate:

What’s unprecedented is the singular determination of the Republicans both on Capitol Hill and in the statehouses to deprive President Obama of his major domestic achievement. Republican officeholders in all 26 states joined together in the case now known as United States Department of Health and Human Services v. State of Florida. In 22 of those states, the officeholder was the attorney general. In four states with Democratic attorneys general (Nevada, Wyoming, Iowa and Mississippi), Republican governors filed in their own names. If any of them noted any irony in the fact that not so long ago, the individual mandate was an idea cooked up by conservative policy wonks to counter more fundamental reform sought by the Clinton administration, they offer no sign.

The countless unprecedented things that Congress has done over the centuries were not, for that reason, unconstitutional. Social Security, Medicare, the Employee Retirement Income Security Act (Erisa), and the Emergency Medical Treatment and Labor Act, the 1986 law passed to prevent hospitals from refusing to care for uninsured patients in acute distress, all come to mind. (From the perspective of today’s toxic politics, it’s a miracle that any of these laws actually got passed, but that’s a separate issue.) So there must be some problem with the Affordable Care Act other than “never before.”

There are other federal mandates involving health care already on the books, including the Medicare payroll tax on workers and employers, and the 1996 Newborns’ and Mothers’ Health Protection Act, which requires plans offering maternity coverage to pay for at least a 48-hour hospital stay (96 hours following a c-section).

Isn’t It Ironic (Don’t You Think)

Some Republicans who can’t help but fly into an apoplectic rage upon hearing the term “mandate” in the context of health care reform remain surprisingly calm when mandating medical procedures for women.

Yes, I’m referring to government-mandated ultrasounds. Currently, seven states — most recently Virginia — mandate that an abortion provider perform an ultrasound on a woman seeking to have an abortion. These states, along with more than a dozen others, also require the provider to ask the woman if she’d like to view the image.

The Guttmacher Institute notes: “Since routine ultrasound is not considered medically necessary as a component of first-trimester abortion, the requirements appear to be a veiled attempt to personify the fetus and dissuade a woman from obtaining an abortion. Moreover, an ultrasound can add significantly to the cost of the procedure.”

Once again, Maddow breaks down the Republican hypocrisy:

The question of whether other parts of the Affordable Care Act can proceed without the individual mandate will continue to be debated until June. If the mandate alone is struck, insurance premiums would likely increase because insurance companies won’t have the built-in benefit of a broader insurance pool.

“Republicans would blame Obama for making health insurance more expensive. Democrats would blame insurers for the higher premiums. In other words: Déjà vu and total gridlock,” writes Jennifer Haberkorn of Politico. Her story explains what’s likely to happen if the Supreme Court strikes just the mandate, or the mandate and insurance reforms, along with the political fall-out if most of the law falls or is upheld.

Josh Gerstein, also of Politico, looks at the effects beyond health care reform: “If the justices knock out key parts of the law or bring down the whole thing, the reverberations could be felt across the legal landscape for generations to come, radically reining in the scope of federal power, according to supporters of the law and others who closely track the high court. And if the justices decide the individual mandate is a constitutional overreach, these observers say, federal labor and environmental laws could be the next on the firing line.”

If you think that seems too dire a prediction, consider Dahlia Lithwick’s reaction to comments made by the court’s conservative justice’s last week: “[A]s the justices pondered whether the individual mandate—that part of the Affordable Care Act that requires most Americans to purchase health insurance or pay a penalty—is constitutional, we got a window into the freedom some of the justices long for. And it is a dark, dark place.”

Those who would welcome the disintegration of health care reform include The Cato Institute’s Michael Cannon. He told NPR that if the entire law were to go away, “we would have just dodged this whole nasty debate over religious freedom and abortion.”

Meaning: There would be no increased access to preventive health care such as contraception, breastfeeding support, and screening for breast and cervical cancers and HIV. But hey, women’s health is so darn offensive when you get down to it, better to just cast it off. Thanks, but we’ve been there.

On the other hand, maybe a defeat at the hands of the Supreme Court will open new doors, for everyone.

– The National Women’s Law Center posted a short video explaining the legal challenges, why it thinks the law is constitutional, and what women could lose if the law is struck down.

– Kaiser Health News coverage of the two-year anniversary of health care reform, from all angles. Plus, a timeline of major implementation milestones and the legal questions involved in the Supreme Court’s review.

– Audio excerpts of arguments challenging the constitutionality of the 2010 health care law are posted on the NYT website, along with reporters’ analysis.