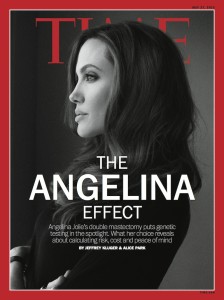 Angelina Jolie certainly has good intentions in sharing her experience with breast cancer genetic testing and her decision to have a prophylactic mastectomy, and her announcement marks another welcomed example of well-known women coming forward about personal health issues.

But it is now up to women’s health advocates to ensure that the media coverage and public debate that follows does not offer false information or false hope — which I fear it will, if women are not fully informed about all the issues involved before imagining that Jolie’s decisions would be the right ones for them.

Already, women in the United States undergo a higher rate of mastectomies than women in other countries. “Breast cancer experts believe that many women undergoing mastectomies don’t need them and are getting them out of fear, not because of the real risks,” Diana Zuckerman, president of both the National Research Center for Women and Families and the Cancer Prevention and Treatment Fund, wrote this week.

First, women need to remember that BRCA1 and BRCA2 mutations occur in less than 1 percent of the population. To decide whether testing for breast cancer genetic mutations makes sense for them, it is important to speak with a knowledgeable health care provider. According to the National Cancer Institute:

The steep price tag of testing, around $3,300, is of concern, though some women considered appropriate candidates for testing may be covered, all or in part, through their insurance. Under the Affordable Care Act, genetic counseling and BRCA testing, if appropriate, are considered preventive services and are covered without cost-sharing.

If a woman does seek testing, she needs to consider the pros and cons of all possible approaches to positive test results. While a bilateral mastectomy reduces the risk of getting the disease by 90 percent, about 10 out of 100 women who have their breasts removed will still get breast cancer in the underlying tissue. And there are numerous potential problems with such surgery that need to be fully discussed, such as infection and mobility impairment.

For those who choose this radical surgery, there is also the decision about whether to pursue breast reconstruction and, if so, what kind. Despite widespread assumptions to the contrary, there are major unresolved safety issues, especially for silicone breast implants.

Some women choose to forgo reconstruction entirely, though most media fail to mention this. The truth is, some women have no problems with their “breastless” bodies, nor do their sexual/intimate partners. Some women also find that modern prostheses are comfortable and offer a satisfying appearance.

Moreover, not all choices — even what might be ideal in a given circumstance — will be possible given financial constraints and lack of adequate medical coverage or support. As Cheryl Lemus, managing editor of Nursing Clio, a blog on gender and medicine, writes:

In order for all women to have the right to red carpet healthcare […] then all women don’t just need money and insurance, but also the other resources Jolie highlighted in her op-ed, which include the supportive partner/spouse, family, an understanding employer, reliable transportation and childcare, and “time” in general.

Sadly, we know this is often not the case.

We also need to be honest about what we know and don’t know about breast cancer and risk. According to the NCI, women who have inherited a harmful mutation in BRCA1 or BRCA2 gene are approximately five times more likely to develop breast cancer than women who do not carry the mutation.

The way the numbers break down, about 12 percent of the general population — or about 120 women out of 1,000 — will develop breast cancer at some point during their lives, compared with about 60 percent — 600 out of 1,000 — who have inherited a harmful BRCA1 or BRCA2 gene mutation.

Yet there are other factors, such as environmental exposure, that influence breast cancer risk. Some women living in communities with high levels of toxic exposure may have elevated breast cancer risk for a non-heritable reason.

The NCI also notes that the risk factor for those carrying the mutated gene is based on research on large families in which many individuals have been affected by cancer. We still have many questions to answer about genetic and environmental influence:

Because family members share a proportion of their genes and, often, their environment, it is possible that the large number of cancer cases seen in these families may be due in part to other genetic or environmental factors. Therefore, risk estimates that are based on families with many affected members may not accurately reflect the levels of risk for BRCA1 and BRCA2 mutation carriers in the general population. In addition, no data are available from long-term studies of the general population comparing cancer risk in women who have harmful BRCA1 or BRCA2 mutations with women who do not have such mutations. Therefore, the percentages given above are estimates that may change as more data become available.

This heightened interest in breast cancer genetic testing caused an uptick in the stock of Myriad Genetics, which has a monopoly on BRCA1 and 2 testing. OBOS is a co-plaintiff in the lawsuit challenging Myriad Genetic’s patenting of human genes, along with the ACLU, Breast Cancer Action, a number of scientific organizations and researchers, and Lisbeth Ceriani, a single mother whose circumstances led her to seek breast cancer genetic testing and who felt stymied by Myriad’s monopoly.

The Supreme Court heard arguments in the case last month and is expected to issue a ruling this summer. Its decision will have a major impact on whether or not scientists will be able to improve upon the current test as well as the future price tag for such testing. In the meantime, let’s hope that thousands of women don’t make hasty decisions about testing and treatment without careful consideration of all the issues involved.

As an actress whose appeal has focused on her beauty, surgically removing both her breasts when she didn’t have cancer was a very gutsy thing to do. But if we care about women’s health, we need to stop thinking of mastectomy as the “brave” choice and understand that the risks and benefits of mastectomy are different for every woman with cancer or the risk of cancer. In breast cancer, any reasonable treatment choice is the brave choice.