Israel: Women and Their Bodies 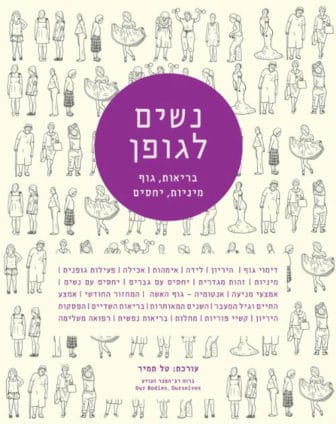 Translation: Women and Their Bodies

Women and Their Bodies published “Nashim LeGufan,” a Hebrew adaptation of Our Bodies, Ourselves, in 2011.

The goal was to create “a clear readable book, each woman’s bible; a book that can be found at each home and library, which contains answers to the questions which we are afraid to ask out loud, or to which we do not know where to find the answers.”Women and Their Bodies also produced an Arabic adaptation. Learn more >

Simultaneously, the organization developed an Arabic resource in partnership with a group of Palestinian women living in Israel and other Arab women in the region. The Hebrew and Arabic adaptations are the first of their kind in research, scope and stories in the Middle East.

“Nashim LeGufan” is adapted to the unique needs of Jewish women and girls living in Israel, with related narratives, images and content. For example, it places emphasis on issues related to infertility and treatment, which is very common in Israel and fully paid by the government. At least 20 percent of Israeli women undergo fertility treatment, despite little or no information on its effects.Read: The Jewish Daily Forward on creating Hebrew and Arabic versions of “Our Bodies, Ourselves” >

The book also discusses the political, ethical and health effects of state-mandated military service by all Israeli citizens, including young women between the ages of 18 and 20.

By boldly addressing issues taboo in Jewish society, the book encourages women to experience their bodies in positive ways. It also reframes cultural vocabulary and negative language constructions. For example, when describing older women, terms that honor midlife were substituted for commonly used negative words that translate to “age of wilting or loss.”

Dana Weinberg, founder and director of Women and Their Bodies, attended OBOS’s 40th anniversary symposium in 2011 and discussed the book during a panel on building power and brokering change, which can be viewed online.

The OBOS Global Initiative provided extensive support on this project, most notably with project start-up and envisioning, as well as fundraising and promotion.

The complete Hebrew adaptation is available online at the Women and Their Bodies website.

The following chapters are available in Hebrew in PDF format:

You can also read the book’s introduction in English, translated from Hebrew.

For information on obtaining print copies, please contact Women and Their Bodies: nashim.nissa [AT] gmail.com

Women and Their Bodies (WTB) seeks to change grassroots and institutional perceptions and attitudes towards women’s health, sexuality and reproductive needs. It is the only organization in Israel with an integrated approach to women’s health, using an awareness- and prevention-driven model rather than a disease or service-based agenda.

WTB’s outreach relies on a dedicated base of more than 350 volunteers from all professions and walks of life in Israel. The organization’s activities include increasing access to the Hebrew and Arabic adaptations of Our Bodies, Ourselves to stakeholders in medical, social work, educational and health fields, as well as to thousands of women nationwide.

WTB is also using the adaptations, along with other materials it has developed, in community workshops on health, reproductive needs and rights, anatomy, sexual development, and body image.

Read the WTB’s December 2017 newsletter ->These workshops, for which WTB is widely known and respected, are conducted in several languages by trained instructors and tailored to the cultural needs of specific populations, including Ethiopian and Russian immigrants, Bedouin women, and the Arab minority within Israel.  The following comments were made by women who participated in the workshops:

WTB also advocates for and builds leadership in women’s health rights activism. It is the only organization to contribute to the “Israel Women’s Network Data Book,” which tracks the status of Israeli women and girls every two years. WTB’s Our Bodies, Ourselves project coordinator is one of two young people (out of 300) to win the 2007 Social Entrepreneur Fellowship competition, a joint initiative of the Israel Venture Network and the New Israel Fund to promote young leadership in Israel.

The organization also manages a tri-lingual health information website, which features content from the Hebrew and Arabic adaptations for a growing audience, many of whom may prefer to seek information anonymously online.