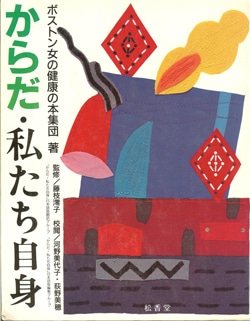 Translation: Women’s Bodies: The Truth about Sexuality and Love 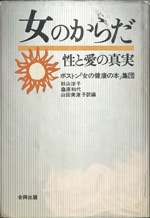 The first Japanese adaptation of Our Bodies, Ourselves was published in 1974 by Godo-shuppan in Tokyo. It was based on the first two U.S. editions: the New England Free Press edition (1971) and the first Simon & Schuster edition (1973).

Three Japanese feminists worked on the project: Yoko Akiyama, Mitsuko Yamada and Kazuyo Kuwahara. It was welcomed by women’s liberation activists at the time, but soon went out of print.

A decade later, Toyoko Nakanishi, owner of Shokado Women’s Bookstore in Kyoto, along with Miho Ogino and other contributors, started a new translation project based on the 1984 edition of Our Bodies, Ourselves.

Three years in the making, the project brought together a team of professionals and volunteers, including a feminist obstetrician-gynecologist who contributed a comparison of medical systems and treatments between Japan and the United States, a photographer who contributed images of women giving birth at a hospital in Hiroshima, and a pregnant woman who modeled in the nude.

The book sold 6,000 copies. In 2004, the OBOS Global Initiative distributed 45 copies to organizations working with Japanese immigrants in the United States.

Though now out of print, the adaptation has had a lasting impact on Japanese society. Miho Ogino, the chief translator/editor of the book, says that while working on the text, the editorial team discovered that some terms for female body parts, including pubic hair and vulva, used Chinese characters with negative connotations. They replaced these characters with others that are more positive or neutral, ultimately coining new terms.

One of these, “seimo” (sexual hair), has been included in the latest dictionaries. Overall, there has been a noticeable shift from Chinese characters that convey shame to neutral characters or “katakana-go” (foreign words turned into Japanese) when talking about male and female bodies.

In an interview with Sandra Buckley, for the book “Broken Silence: Voices of Japanese Feminism,” Toyoko Nakanishi linked the development of this new language with a need in Japanese women to better negotiate their relationship with institutions of power. She described this need as a provocative strategy to reclaim women’s bodies; and, as feminists engaged in theoretical debate while ordinary women struggled with real physical experiences, believed the Japanese adaptation was “very timely.”

For more information about the legacy of the Japanese edition, read this blog post by Kathy Davis, a noted authority on feminist scholarship and author of “The Making of Our Bodies, Ourselves: How Feminism Travels Across Borders.”

“This edition, published at a time when women did not have words to talk about their bodies, opened up a new way for Japanese women and girls to discuss their bodies and sexuality,” writes Davis, who describes meeting Toyoko Nakanishi, the bookstore owner, and the work involved in the 1988 adaptation.

Editor Miho Ogino attended OBOS’s 40th anniversary symposium in 2011 and took part in a panel on the making of “Our Bodies, Ourselves.” A professor of gender history and queer studies at Doshisha University Graduate School in Kyoto, Ogino’s most recent book is “The Road to Family Planning: Reproductive Politics in Modern Japan” (2008). She is currently writing about the women’s health movement in Japan and the United States.

The book addresses issues around body image and identity, including dieting, eating disorders, cosmetic surgery, violence and rape — all of which are also serious problems in Japan. The Japanese edition includes information on shelters and counseling services.

To learn more about the project, read the preface, which has been translated into English.

The Japanese adaptation also inspired women to come together to share stories about their lives and to research and publish information on issues that affect them. Building on Shokado’s activism, they have worked to dispel shame around issues like birth control, menopause, endometriosis and violence, and have encouraged medical professionals to improve the quality of health services provided to women.

Firststep is one example. This group of amateur and professional translators met monthly in Toyonaka City to discuss an updated Japanese edition. They eventually developed content based on five chapters in the English edition, and distributed it online.

Toshiko Honda, who worked with Toyoko Nakanishi and Miho Ogino on the earlier adaptation, served as advisor on Firststep’s project, representing continuity and amplification of Shokado’s activism on behalf of Japanese women.

Several individuals who contributed to the project are willing to respond to related queries. To find out more, please contact OBOS.