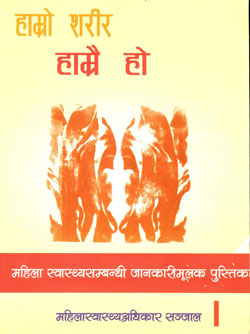 Translation: Our Body, Ourselves

The Women’s Rehabilitation Center (WOREC) published six booklets based on Our Bodies, Ourselves in 2008.

The series focuses on sexuality and violence against women, as well as the politics of women’s health and human rights. It serves as a vital educational and training tool throughout the country.

The booklets cover gender and sexuality; factors affecting the health of women, including nutrition, the environment, and occupational hazards of agrarian work; violence against women, with an emphasis on sexual violence, underage marriage and dowry; body politics, including fertility, pregnancy, the ethics of sex determination, and the politics around reproductive freedom and population control; self-help, with an emphasis on educating women about information resources and services, and the Nepali healthcare system; and health policy.

Health conditions such as prolapsed uterus and anemia, which are widely prevalent in Nepal, are included in the booklet on factors affecting health. The same booklet covers abortion and the need for timely, affordable and safe access.

The OBOS Global Initiative provided extensive support on this project, most notably with start-up planning and envisioning, as well as fundraising and promotion. OBOS also helped increase access to the booklets by posting excerpts online (see below).

In 2012, WOREC and OBOS started building on their longstanding partnership with a strategic new civil society response to the growing and unregulated global market in commercial surrogacy. At the time, Nepal was poised for cross-border expansion, yet there was little dialogue or awareness about the practice. Nepal eventually banned commercial surrogacy in 2015.

Prior to the ban, OBOS worked closely with WOREC and Sama Resource Group for Women and Health in India, which is leading the call for closer scrutiny and regulation of industry practices.

Also in 2012, OBOS’s Judy Norsigian led a workshop in Kathmandu on the growing popularity of cross-border surrogacy arrangements along with WOREC’s founder, Dr. Renu Rajbhandari, and two colleagues from Sama.

In 2013, OBOS and Sama helped build WOREC’s capacity to train a nationwide network of Women Human Rights Defenders and allies on commercial surrogacy; conduct a situational analysis on the status of formal and informal surrogacy arrangements; and develop outreach plans and materials for government allies, the media, and the Nepali public.

Dr. Rajbhandari attended OBOS’s 40th anniversary symposium in 2011 and took part in a panel on meeting challenges to autonomy and activism, which can be viewed online.

“I did training for more than 5,000 women across the country, and all their stories and all their experiences are in Our Bodies, Ourselves,” Dr. Rajbhandari told the symposium audience. “Along with the stories and political activism, we started brokering power at the personal as well as at the political level. As of this moment, we have something to celebrate.”

The following chapters in Nepali are available in PDF format.

We did a health camp here where 534 women came to seek help, to understand themselves, and to get trained from a feminist perspective. That was an overwhelming experience … Our OBOS [booklets] at this moment are making this possible.”- WOREC

In 1991, a group of activists established the Women’s Rehabilitation Center (WOREC) in response to the unmet needs of a woman who had been trafficked and experienced extreme human rights abuses.

More than two decades later, WOREC works to reduce gender-based violence and ensure health, economic, social and cultural rights through grassroots and institutional partnerships. Services include a hotline for abused women, safe houses with counseling and legal support for survivors, safe migration information booths across the country, and health counseling centers run by “barefoot gynecologists” — women who have used self-examination and self-help methods to learn about their bodies and are training others.

Despite political unrest and public resentment for their work on women’s rights and the rights of Dalits, a socially and economically disadvantaged group, WOREC and its nationwide network of Women Human Rights Defenders use the booklets based on Our Bodies, Ourselves in trainings and health camps across the country. This includes a capacity-building project to train young women leaders.

Beyond grassroots, WOREC’s outreach targets policy makers and international agencies. WOREC has collaborated with government ministries on a national health strategy focused on women; conducted trainings on gender and violence for more than 30 district governments and nonprofit groups; and organized a Women’s Tribunal on poverty, attended by the State Health Minister, to document the implications of denying women health care.

As Nepal slowly transitions from a monarchy to a fledgling democracy, the organization continues to influence the country’s political transformation. In 2007, WOREC was part of a coalition responsible for the inclusion of reproductive health rights in the interim constitution; it is now working to ensure these rights are included in the final constitution and with the Ministry of Health and Population.