Menu
Home > Our Impact > Our Bodies, Our Blog > What Does A Day Without A Woman Look Like (And Why Is It Needed)?

What Does A Day Without A Woman Look Like (And Why Is It Needed)? 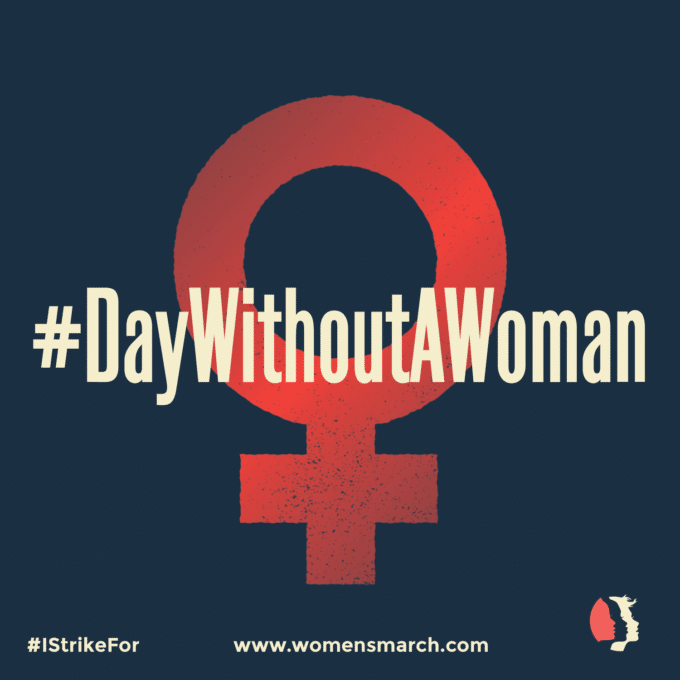 At the historic women’s marches on January 21, nearly 5 million people around the world came together to protest a new administration intent upon dismantling the civil and human rights of women and gender-oppressed people. The marches were not a one-and-done deal. The organizers of the Women’s March in Washington have come together again to organize A Day Without a Woman, which will take place on March 8, International Women’s Day. The effort has combined with the International Women’s Strike, a project born in Poland after the massive protests that brought together women from 35 countries. Want to get involved or show solidarity? Read on!

A Day Without a Woman is being billed as “a one-day demonstration of economic solidarity.” Women are encouraged to refrain from paid or unpaid labor for the day, or, if that’s not feasible (and, of course, for many women it isn’t), to avoid shopping for the day (unless it’s at minority/women-owned businesses), and/or to wear red to show solidarity with the cause (male allies: this part includes you!).

Since the new administration entered office, they and the anti-reproductive rights majority in Congress have proposed or implemented a rush of restrictions on women’s health and lives. There is no shortage of reasons for women to protest the political landscape: from President Trump and congressional leadership promising to repeal the Affordable Care Act, expanding the Global Gag Rule, and pushing to make the Hyde Amendment permanent law to attacking the rights of immigrant women and their families and rescinding protections for transgender people.

The day of action is meant to call attention to the indispensable role women play in the global economy:

The goal is to highlight the economic power and significance that women have in the US and global economies, while calling attention to the economic injustices women and gender nonconforming people continue to face.  We play an indispensable role in the daily functions of life in all of society, through paid & unpaid, seen & unseen labor.

The demands for justice are inclusive and include bodily autonomy, an end to hiring discrimination, a call for gender justice, the protection of the human rights of LGBTQ, two-spirit, and gender non-conforming people, and workers’ rights (including sex workers).

What can you do? First, if you’re able to take the day off of work, without fear of losing your job, it’s a powerful way to take a stand. Also, refrain from unpaid labor if you can. This means not engaging in any type of care work for the day, as the A Day Without a Woman campaign explains:

Care work is work, whether paid or unpaid, and the burden of care falls disproportionately on the shoulders of women, particularly women of color.  Whether it’s child care, elder care, self-care, emotional care, caregiving plays a central role in keeping America’s economy going. Women make up the bulk of minimum wage earners and caregivers are often at the bottom of this and are most often women of color.  We must repair and replace the systemic disparities that permeate caregiving at every level of society.  We stand for the rights, dignity, and fair treatment of all unpaid and paid caregivers.

It also means that male allies can step up and help out by doing this work for the day. If you aren’t able to step away for the day, because you’re the primary means of support for yourself or your family, or you need to provide critical services, you can still participate! Wear red in a show of solidarity. Don’t purchase anything unless it’s from locally-owned or woman-owned businesses (check out #Grabyourwallet for lists of businesses to boycott or support).

If you’re able to take the day away from work, either unpaid or not, you can join one of the women’s strikes, marches, and rallies that are happening in the United States and around the world.

March 8 is also International Women’s Day, observed since the early 1900s. It was created at the International Conference of Working Women in 1910 and has grown steadily from there. It’s a day to honor the achievements of women but it’s also a time to call for progress on gender equity. This year’s theme is #BeBoldForChange and there are actions and events happening all over the world. You can find out more here.

One of the most powerful things about the women’s marches, the ongoing campaigns, and the International Women’s Strike is the ways in which all issues that impact women are linked and highlighted. Making sure abortion remains legal in the United States is an empty right unless all women, regardless of socioeconomic status, race, or citizenship status, can access safe abortion care. Transgender and gender non-conforming people must feel safe and supported when seeking health care. Women of color, immigrant women, and low-income women would be the most negatively impacted if the ACA is repealed or key pieces are stripped. Economic justice is reproductive justice is LGBT justice. Take March 8 as a day to recognize how deeply connected all of our rights are, as women, and find a way to demonstrate your support for women’s rights as human rights.