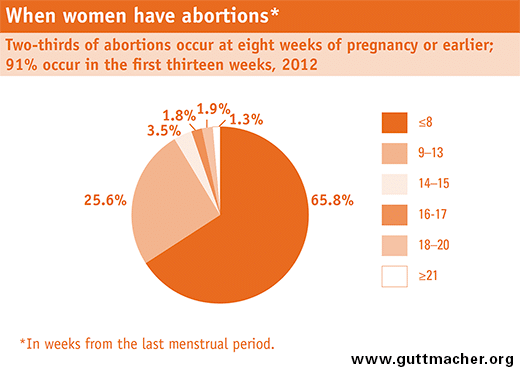 How far along in the pregnancy can I be?

Medication Abortion: Up to ten weeks from the first day of your last period.

Aspiration Abortion: Up to 12 weeks from the first day of your last period.

Learn more about what to expect during a medication abortion.
Medication Abortion: Generally, the abortion pill (mifepristone) is taken in person at the clinic or at a doctor’s office. Most women feel fine after taking mifepristone, though some experience nausea. At home, 6 to 72 hours later, a second pill, misoprostol, is taken bucally (placed in your cheek to dissolve) or vaginally, as instructed by your healthcare provider.

The abortion starts one to four hours after taking the misoprostol. Heavy bleeding and cramps last for a couple of hours. You will have a follow-up appointment about a week later to be sure the abortion is complete.

Learn more about what to expect during an aspiration abortion.

Aspiration Abortion: The abortion takes place in the clinic or office. The actual abortion procedure takes five to 10 minutes. A physician uses medical instruments in your vagina and uterus to remove the pregnancy. A return visit is required only if you experience problems, or if you would like to see a healthcare provider.

How painful is it?

Medication Abortion and Aspiration Abortion: Expect mild to very strong cramps on and off during the abortion, which may be managed (or helped) with pain medication.

How much will I bleed?

Medication Abortion: Heavy bleeding with clots is common when you are passing the pregnancy. After that, lighter bleeding may continue off and on for one to two weeks or more.

Aspiration Abortion: Light bleeding generally lasts for one to seven days. Bleeding may continue off and on for a few weeks.

How much does it cost?

For information on how to find an abortion provider and how to get help paying for an abortion, see Abortion Resources & Support.

For both types of abortion, the exact cost depends on whether you have insurance as well as your location, the facility, and timing. The range is anywhere from $0-$950.

Can the abortion fail?

Medication Abortion: For women 8 weeks pregnant or less, the pills work about 94-98 out of 100 times. They are slightly less effective later at 8- 10 weeks. If the pills fail, you will need to either try them again or have an aspiration abortion.

Aspiration Abortion: It works 99 percent of the time. If it fails, you will need to have a repeat aspiration abortion.

Can I have children afterward?

Yes. Neither type of abortion reduces your chances of getting or staying pregnant in the future.

Medication Abortion: Both pills have been used safely since the late 1980s in Europe and since 2000 in the U.S. Major problems are rare. Medication abortion carries at least 10 times less risk of health complications than continuing a pregnancy.

Aspiration Abortion: Aspiration abortion is a safe and common procedure that has been done for more than 40 years. Abortion in the first eight weeks is the safest, and problems with any first trimester abortions are rare. Surgical abortion carries at least 10 times less risk of health complications than continuing a pregnancy.

What are the advantages?

Medication Abortion: No shots, anesthesia or medical instruments are involved. The abortion may feel more natural, like a miscarriage. It can be done earlier in the pregnancy than an aspiration abortion. You have the option to be at home or wherever you feel most comfortable. You can choose to have someone with you, or you can be alone.

What are the disadvantages?

Aspiration Abortion: It is more invasive; instruments are inserted through the vagina and into the uterus. Anesthetics and pain medication may cause side effects. You have less control over the procedure and perhaps over who can accompany you into the room. The vacuum aspirator may seem noisy. It cannot be done as early in pregnancy as medication abortion.

Free the Pill! by Guest Contributor May 28, 2020 by Carrie Baker Sixty years ago this month, the U.S. Food and Drug Administration approved the birth control pill for distribution in the United States — a game changer for women’s lives. Before approval of the pill, most women were…
Abortion and Women's Rights in 1970: A Film by Judy Norsigian October 12, 2020 In 1971, when abortion was illegal in all but a few states, a group of women came together to make a documentary film about their personal experiences with abortion.
Adapting “Our Bodies, Ourselves” to Brazilian Portuguese: The Translators’ Experiences by OBOS July 30, 2020 "[H]aving the opportunity of translating … “Our Bodies, Ourselves” to Brazilian Portuguese ... brings me a profound sense of accomplishment, since there is not such a complete book on women's health in Portuguese with so much information and so many…
© 2021 Our Bodies Ourselves. All Rights Reserved.
Crafted by Cornershop